Have you ever seen someone pirouette across a busy, pedestrianised shopping street (like Grafton Street, for example) and dramatically split-leap into the cosmetics hall of a high-end department store (let’s say Brown Thomas)? I’m guessing probably not, unless you happened to be standing near me on a fateful day in the summer of 1999 when I witnessed exactly such a spectacle occur.

It was the kind of spectacle you might see performed less competently by the clutzy heroine in a romantic comedy, ending in an inglorious smash into a heavy, gilded swinging door. It was the kind of spectacle that in New York or San Francisco might illicit a spontaneous round of applause from the assembled shoppers, but in Ireland – on the cusp of the Celtic Tiger, before attention-seeking had become an art form to be mastered rather than something to be embarrassed about – would be met by stoney faces, a couple of eye-rolls, and in extreme cases a disdain that would last fifteen years. 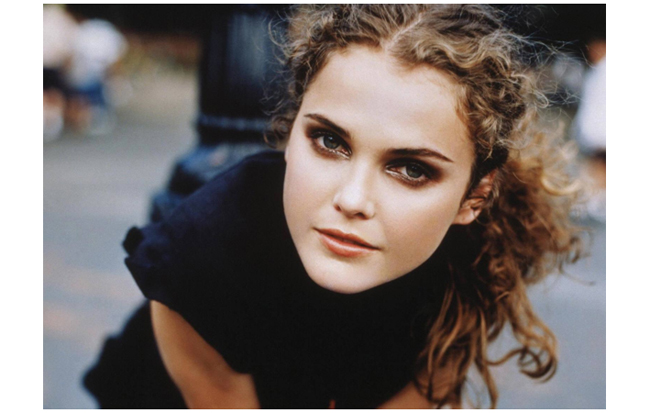 I was witness to such a spectacle, and the perpetrator was Keri Russell. Or as she was then known, “Felicity”. And my response was extreme. Though I had no further interaction with her, and no context for the spectacle – I don’t know if it was a dare, or a tic – I took against Keri Russell on that day. I took against her in a BIG way. You know how we ALL have some random celebrity for whom we harbour such an irrational level of hatred that actively rooting against them is almost one of our pastimes? Those actors or musicians we despise for no better reason than “I don’t like his face”? Well, mine was Keri Russell, and essentially I hated her for twirling in a public place.

And so I positively reveled in her apparent lack of post-Felicity success, because I hated her for twirling in a public place, and when I reluctantly watched Waitress on a plane several years later, I had to first overcome my outrage that she had the nerve to still be pursuing a career, IN SPITE OF THE TWIRLING! I mean, it was almost a decade later, maybe she’d stopped twirling in public places? That would have been the logical way to look at it, but sadly there was never any logic to this hostility to begin with. After Waitress she seemed to disappear again, so I smugly assumed I had another decade of pointless ill-will to look forward to, UGH! Keri Russell-ing every mention of her. 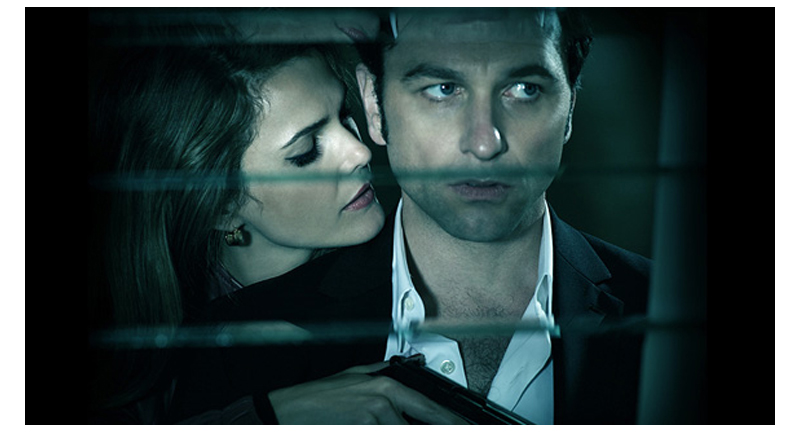 But I was wrong. Keri Russell is back, and tempting as it was to “UGH! Keri Russell!” The Americans, it was a drama about undercover Russian spies set in the 80s, so there was simply no way I wasn’t going to at least give it a chance. And I am SO glad I did. I’ve talked about it before, and even though it doesn’t get the love it deserves (EMMYS!!!), there are critics who rave about it, and the insane chemistry between the leads, and how great Matthew Rhys is as Philip and how incredible Keri Russell is as Elizabeth. And I’m ready to say… They’re right. I have done a complete Keri Russell U-Turn, thanks in part to The Americans, the healing power of time, and, last but not least, her unbelievably great sense of style. Yup, I’m that shallow. 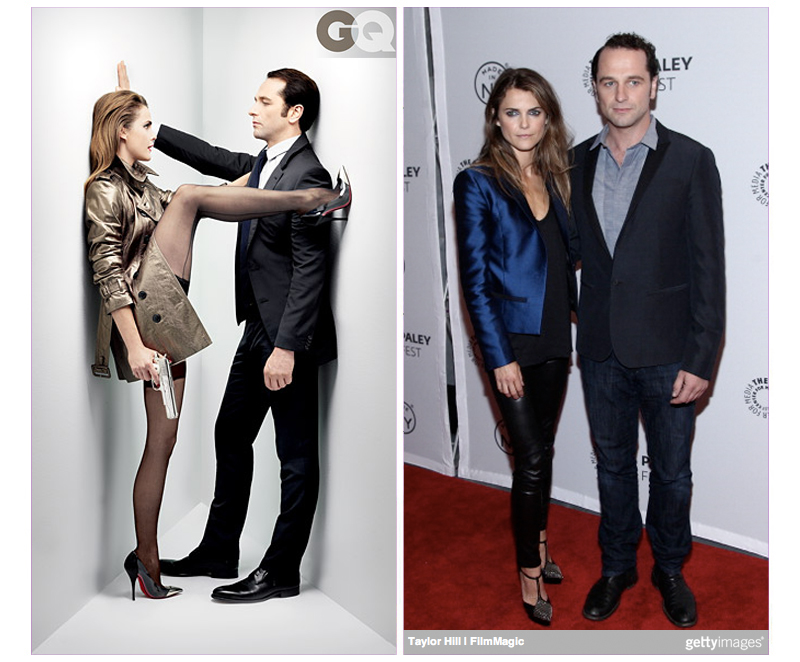 Super Hawt! The now real-life couple in a GQ photoshoot and on the red carpet.

Last month on Go Fug Yourself, Jessica wrote about Keri that “she and I are about the same age and I am not kidding when I say that she makes me feel good about said age”, and to that I say YES! A thousand times YES! Because when you hit your mid-thirties you can suddenly start to feel physically uncomfortable in clothes you’ve been wearing for years, and when you’re shopping it can be hard to shake the feeling that you’ve been cast into a fashion wasteland where everything is too short or too twee or just too young for you to wear! Often you start to move in a different style direction, and it can take a few years to find your way. If that sounds familiar, let Keri Russell be your guide!

She has blown me away this year with a just few choice, classic pieces reworn and reworked into a multitude of extremely sophisticated but effortlessly cool looks; a silk shirt here, a great quality white vest top there, a classic striped tee, a leather skirt, mixed and matched with a few beautifully tailored items – like these Proenza Schouler shorts worn with a black silk blouse and her go-to heels, Gianvito Rossi leather and pvc mules. 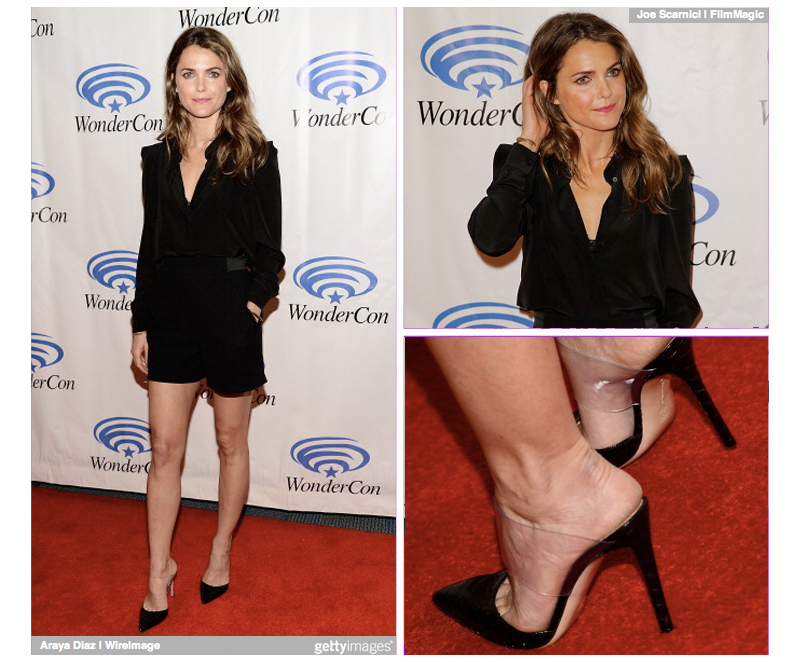 I have one ok blazer, but the first thing on my list is to invest in one great blazer. Keri has a couple of beautifully cut jackets that she wears with everything, proving that a multitude of different looks can be constructed around one great piece. 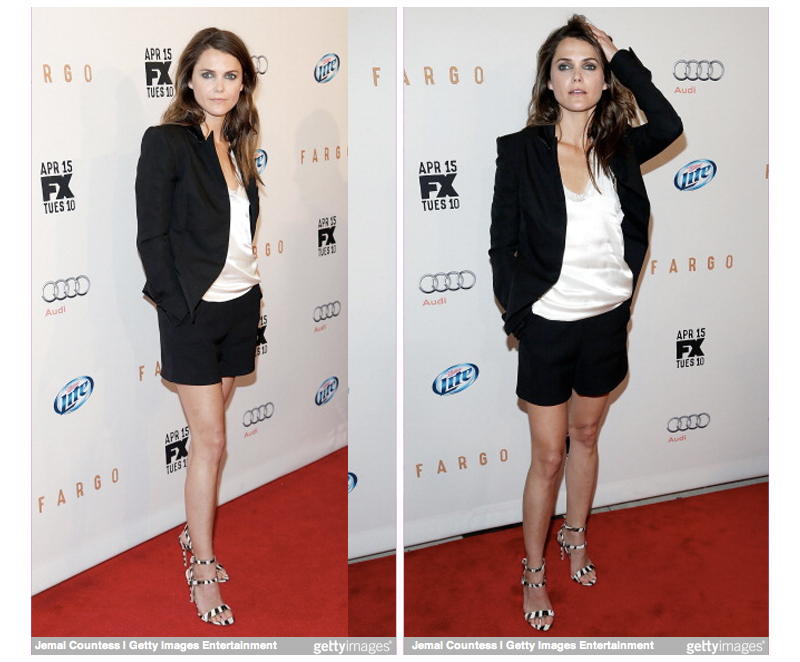 At a screening for Fargo this year she wore this shorter length jacket with a raw edged Haider Ackerman silk vest top, giving a whole other look to those same Proenza Schouler tailored shorts, but she makes a similar cut jacket in a metallic blue look a bit more rock ‘n’ roll by teaming it with tight leather trousers, some studded shoes, and a loose silk tank top with a peek of lace. 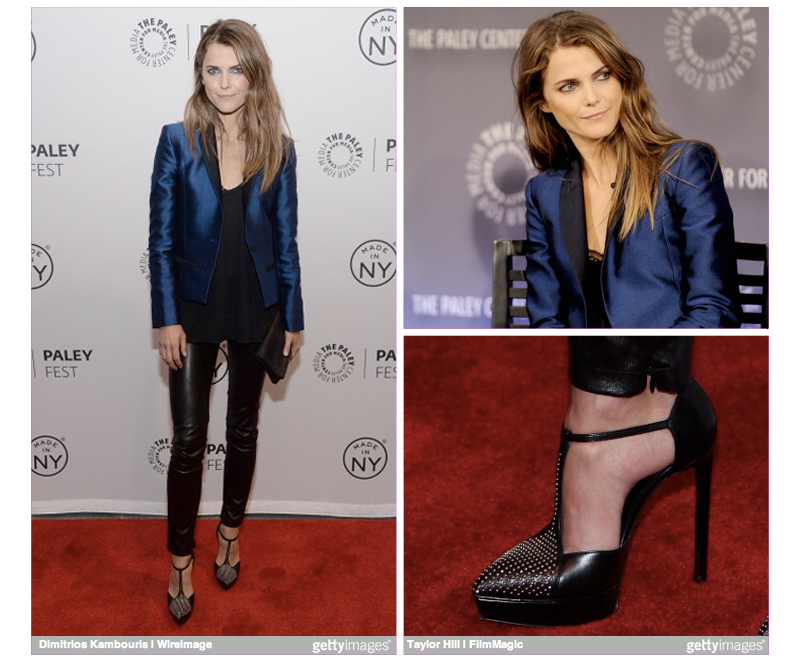 She wears a longer length too, often on her shoulders (an offense for which I would usually want to punch someone in the face). Simplicity is the key for this look too, with the unusual slashed-neckline-and-collar-combo and a little drape adding some interest to an otherwise simple silk top. 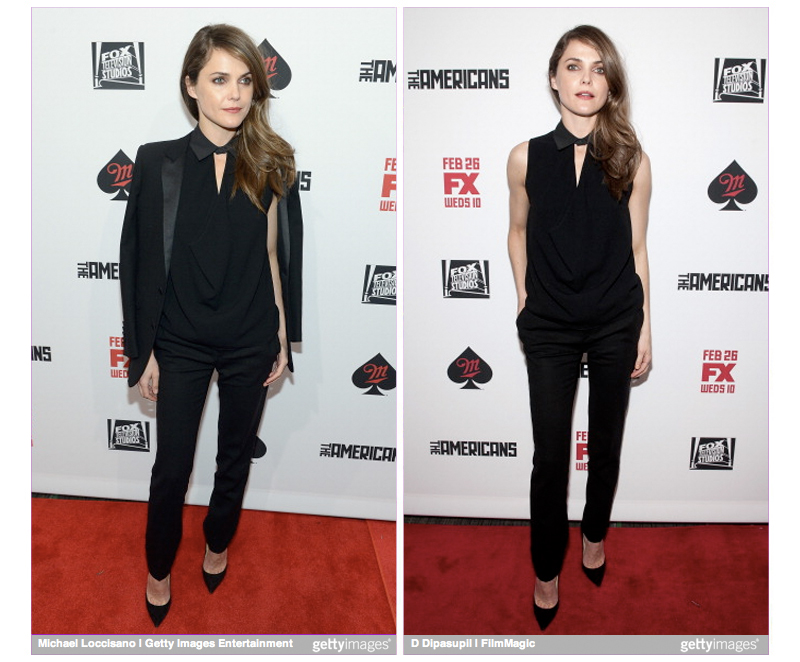 She applied the same principles to a dressier look at the Writer’s Guild Awards. She has a million white vests and a million ways to wear them, and this time it’s with a lacy bra providing a trim on the low, scooped neck, while the satin bustle on her Givenchy skirt gives a focal point that keeps the look masterfully simple. 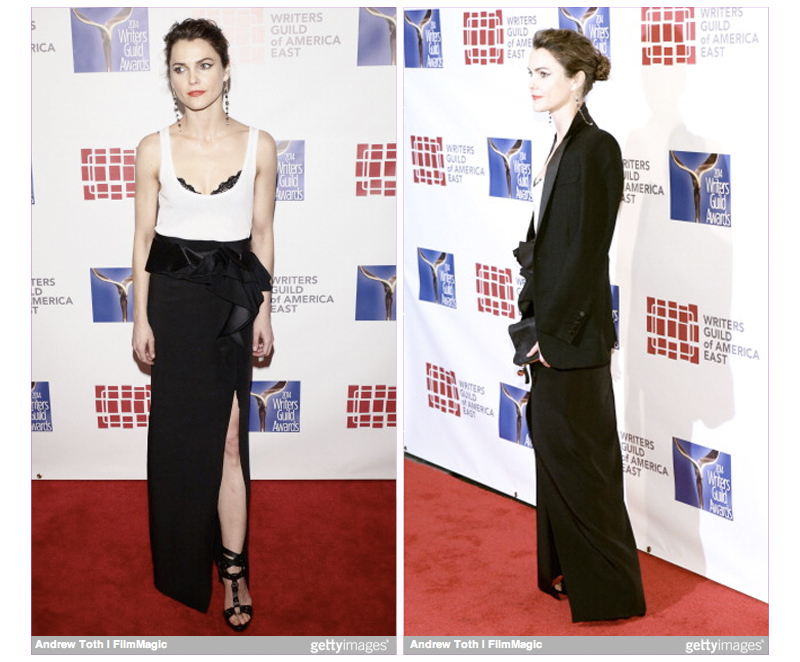 She seldom breaks away from a classic black and white palette, and sticking with the safety of monochrome gives her the freedom to have a little fun with shapes, like this voluminous look from Monique Lhuillier at the premiere for Rise of the Planet of the Apes. 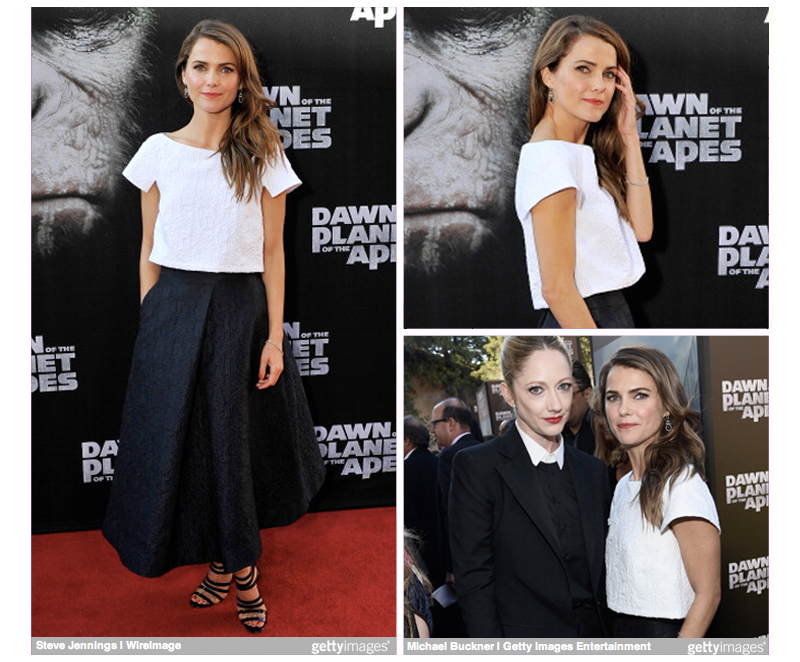 The stand on the top is gorgeous, and this is that rare time I’d agree that a strappy shoe was the right choice over a solid pump, because it really breaks up the weight of the skirt and lightens the whole look. In general she rocks (and I could end that sentence there, but I’ll add) at accessorising. She’s not a big jewellery person, and will often just add a bracelet, an approach I can relate to as possibly the last person on the planet to still not own a statement necklace. But when she does statement accessories, she does them her way – understated and cool. 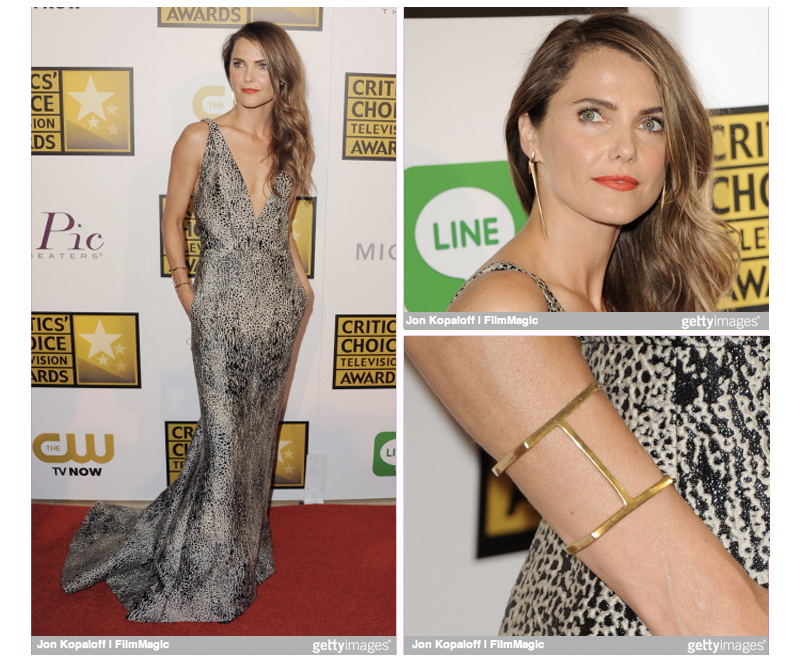 I love the unconventional choice of oversized spike earrings and a gold cage cuff she wore to add a little edge to her J.Mendel gown at the Critic’s Choice TV Awards, and the dress is magnificent. Cut to look almost like bias silk, but with the structure and shaping of a heavier jacquard, this is a really modern take on an Old Hollywood gown, 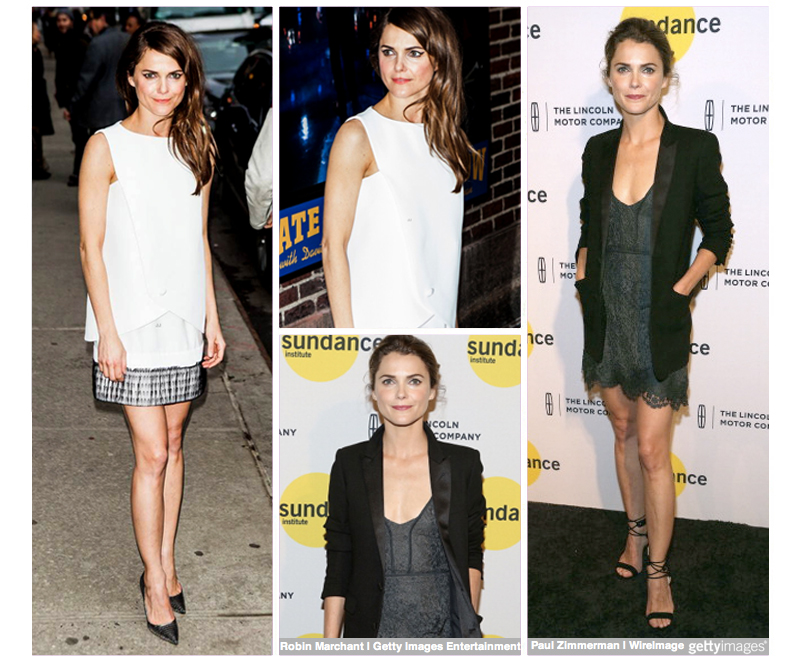 Though she has a preference for trousers and tailoring on the red carpet, even when she opts for a gown or a cocktail dress she stays true to the menswear-inspired aesthetic and makes everything feel very “her”. More feminine pieces, like the cute lace cocktail dress she wore at Sundance, are worn in subdued neutrals with her favourite tux jacket to keep it consistent with her style, and the bib-like cut on the little, white Balenciaga dress she wore to a taping of the Letterman show is reminiscent of mens shirting and that tuxedo inspiration she loves.

But that’s not say she’s not capable of pulling out a few surprises. File these under “Crotch shapes that would be inadvisable on anyone who isn’t Keri Russell, but somehow work on Keri Russell.” 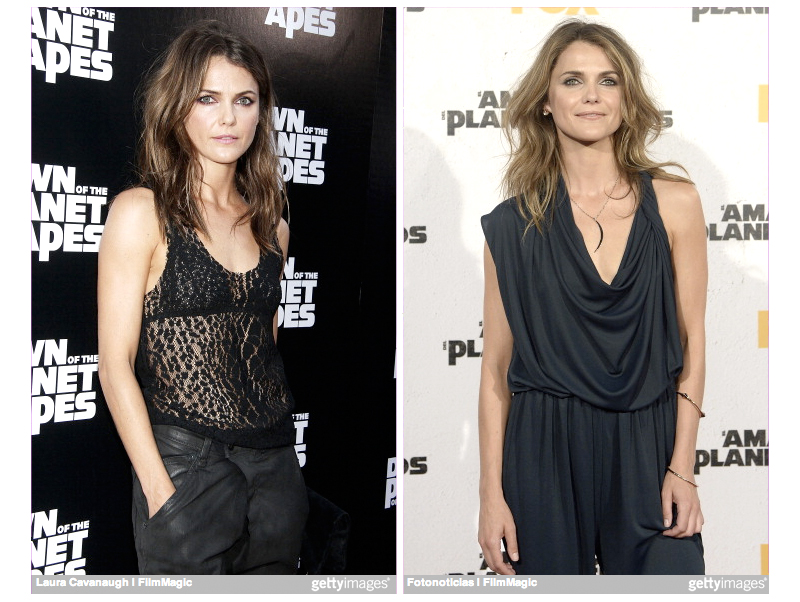 Looking like a hot mess who had your jumpsuit reshaped by Halston in the middle of the dance floor at Studio 54 while you were grinding against a greased up bus boy is pretty much my favourite kind of hot mess chic, so that look gets two thumbs up from me. And when I find myself also giving a thumbs up to a pair of wrap-front, wax coated, drop crotch jeans – an abomination of a concept – I find myself wondering if Keri Russell is some kind of style witch. And also where I can get myself some wrap-front, wax coated, drop crotch jeans. 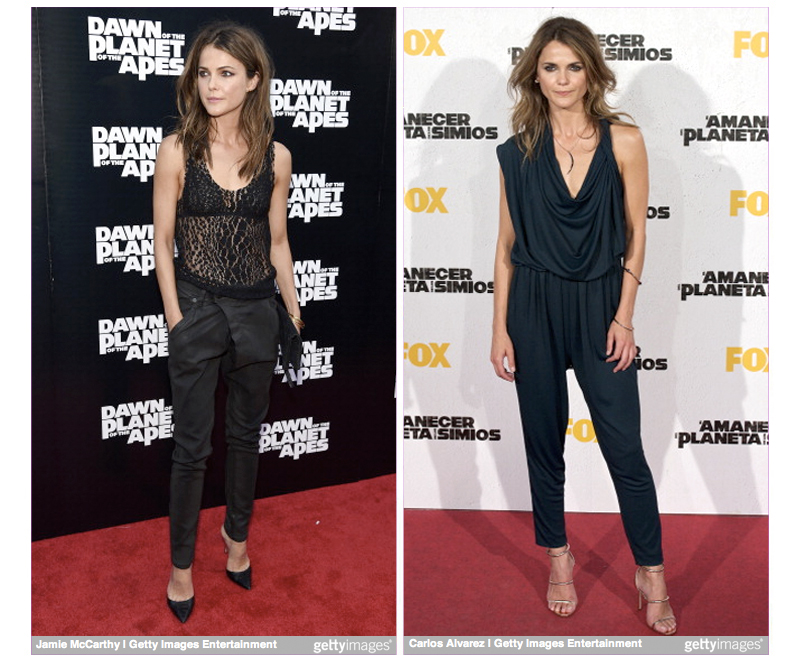 She is a walking master class in how to pull together a wardrobe of cool, contemporary and classic pieces, and wear them like you’re a damn rock star, because the upshot of no longer being young enough to dress like a girl is that you can dress like a woman instead. Even her more casual, “off-duty” looks are achingly cool and yet feel so doable in real life, on a real budget. 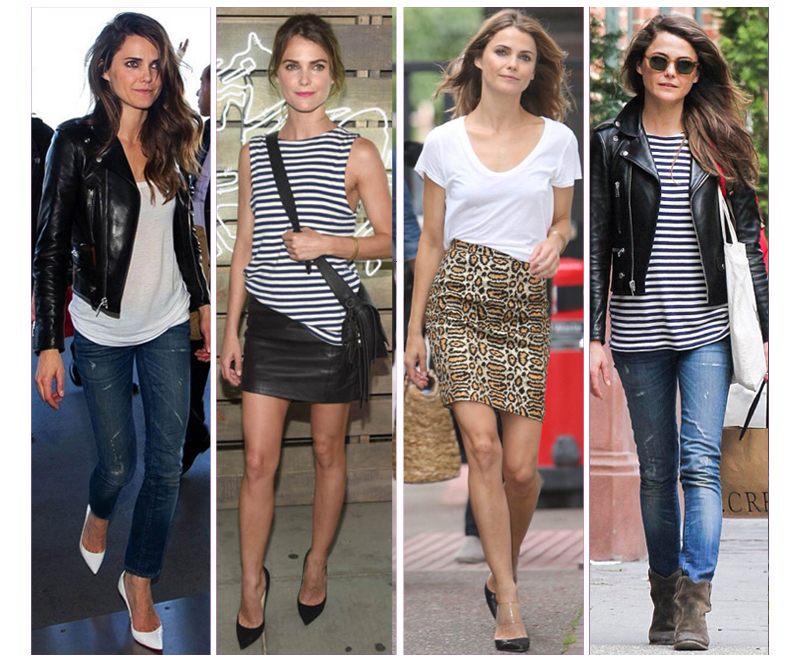 I’ve felt like I’m in a real style rut for the last while, and Keri Russell makes me feel like dragging myself out of it and rediscovering the simple joy of great clothes, with “Well if Keri Russell can do it…” as my new mantra. So if Keri Russell can wear leather trousers / have that much hair / wear bright pink lipstick / leave her husband for Matthew Rhys, these are all things I feel I should consider trying too. She’s my almost-40, thin-lipped, long-hair-don’t-care style-Goddess, and I kinda love her, because I don’t do anything by halves, including U-Turns!

So if I know you and you bump into me in a few weeks and I’ve dyed my hair brown and I’m wearing it over one shoulder, with a tank top and a biker jacket, be a dear and don’t mention this post. It’ll be really embarrassing for both of us.

The Dress Down has been nominated for “Best Fashion” in the inaugural Image Magazine Blog Awards! Your support would mean so much, so if you’d like to vote please click here. 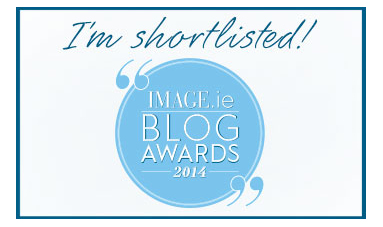