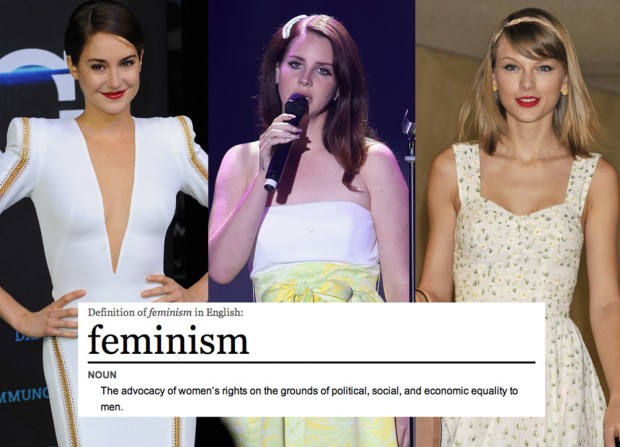 For the love of God, here we go again. Lana Del Rey – and to be clear, I was not previously rolling in respect and admiration for Lana Del Rey – was asked this week her opinion on feminism, and her response was “For me, the issue of feminism is just not an interesting concept. Whenever people bring up feminism, I’m like, god. I’m just not really that interested.”

And I kind of know how she feels, because whenever a celebrity completely dismisses the work that women have done, and continue to do, to achieve equality of the sexes, I’m like, GOD! Her idea of a true feminist “is a woman who feels free enough to do whatever she wants.” And I’m like, GOD, because my idea of a self-absorbed idiot is a woman who finds it too tedious to acknowledge that the very thing she’s so blithely dismissing is the reason that any woman anywhere gets to “do whatever she wants.”

And unfortunately, these comments make Lana just the latest of many female celebrities who have recently seen fit to reject, dismiss or otherwise question the validity of feminism; Kelly Clarkson, Taylor Swift, Katy Perry, Lily Allen, and just last month Shailene Woodley, have all been quick to point out to the media that, for various reasons, they’re not feminists, and in return the media has been quick to look at their reasons and point out “OK, but you also don’t know what the fuck you’re talking about.”

Because while most people (and the goddamn dictionary) define feminism as a belief in the equality of the sexes, the answers that some of these celebrities gave to the simple question “Are you a feminist?” reveal blatant and age-old misconceptions about the nature of feminism.

No, I wouldn’t say I’m a feminist — that’s too strong. I think when people hear feminist, it’s like, ‘Get out of my way, I don’t need anyone’

I don’t really think about things as guys versus girls. I never have. I was raised by parents who brought me up to think if you work as hard as guys, you can go far in life.

I am not a feminist, but I do believe in the power of women.

Feminism. I hate that word because it shouldn’t even be a thing anymore. I don’t think men are the enemy.

No because I love men, and I think the idea of ‘raise women to power, take the men away from the power’ is never going to work out because you need balance.

Let’s take another look at that definition, shall we?

Thank you Kiera Knightly, because it really is THAT SIMPLE. And I can’t tell you how galling it is to hear people spreading their own misinformed interpretation of something so important, because not only are they missing the point, that without the feminist movement they might not be in a position to express their half-assed opinions in the first place, but they’re also perpetuating the myth that we live in some sort of post-feminist utopia, AND they’re contributing to the idea that there’s some sort of stigma around identifying as a feminist. And why does it matter, you might wonder. They’re only celebrities. But it does matter, because they have influence, and in preaching the irrelevance of something they clearly don’t understand they’re passing on that misinformation and depriving their young fans of the opportunity to embrace the word, to normalise it among their generation, to look at the ACTUAL definition of feminism and go “Equality of the sexes? Of COURSE I’m in favour of that. Of COURSE I’m a feminist!”

Because feminism should be the default ideological stance of people everywhere, not something you admit to under duress or a nasty slur that can be thrown at you. But to realise that, you have to have some sort of interest in and connection to the wider world, and I suspect the reason so many celebrities can’t or won’t embrace this word is that they live in a bubble of privilege that renders them incapable of a having a realistic world view. In many cases they lack an education, they lack real world experience, and they lack basic societal awareness because they’re so bogged down by their own narcissism that reality doesn’t impinge on their lives. In a way their dismissive attitude to feminism is a by-product of their own success: I’m doing ok, and to hell with everyone else. I’ll let Louis CK articulate my anger at this completely myopic attitude.

Because substitute “indulged, self-absorbed celebrity” for “child” and “feminism” for “bubble gum Tylenol” and that’s exactly how incredulous I feel that these idiots won’t at least take the time to inform themselves before they piss all over the very thing that has afforded them the freedom to live their lives exactly as they want to; to have a career, to create, to voice an opinion, to earn their own money, to have their own bank account to keep it in, to date, to have control over their reproductive choices, to marry (or not) whomever they choose, to divorce, to own property, to vote, to travel… Those are basic freedoms that they, that I, and that probably most of you reading this enjoy, and we should never take them for granted.

In short, I’m a feminist because I care about other people. I care when a schoolgirl gets shot in the head for wanting to go to school, I care when a pregnant woman dies in a modern hospital in the country I live in because my government is too scared to legislate for abortion, and I care that women’s rights are being infringed upon and taken from them, daily, everywhere from America to Pakistan. And if you care about that stuff you’re probably a feminist too, and if you don’t care about that stuff, if you don’t see how it affects you, then at least consider how the knock-on effect might affect you or the girls and women you love somewhere down the line. Consider the bigger picture. Consider this essay.

Shailene Woodley explained that her “biggest thing is really sisterhood more than feminism.” She doesn’t know “how we as women expect men to respect us because we don’t even seem to respect each other.” But again, she’s missing the point, because there is no greater way to demonstrate your respect for yourself and for other women than by identifying as a feminist. She talks about “sisterhood” like it means forming a mutual admiration society with our gal pals, banding together with our “sisters” to tell each other how awesome we are – like that transcends the need for feminism. It doesn’t. Sisterhood is not a replacement for feminism, but feminism does need sisterhood, just not the hippy-dippy kind that she talks about.

Sisterhood means leaving your bubble and supporting efforts to progress the cause of women the world over. I’m a feminist, I’m married to a feminist, and I’ll never stop being a feminist, because the world is bigger than me and the fight for equality hasn’t been won just because I’m ok. So I’m sorry, Lana, that it bores you, I’m sorry, Lily, that you’re over it, and I’m sorry, Shailene, that you never got it in the first place, but lucky for you we’ve got your back anyway, because feminism means standing up for the rights of all women, everywhere – even the ones who are too ill-informed, too lazy or too self-centred to care.