2017 Oscars: Thank you for hearing me 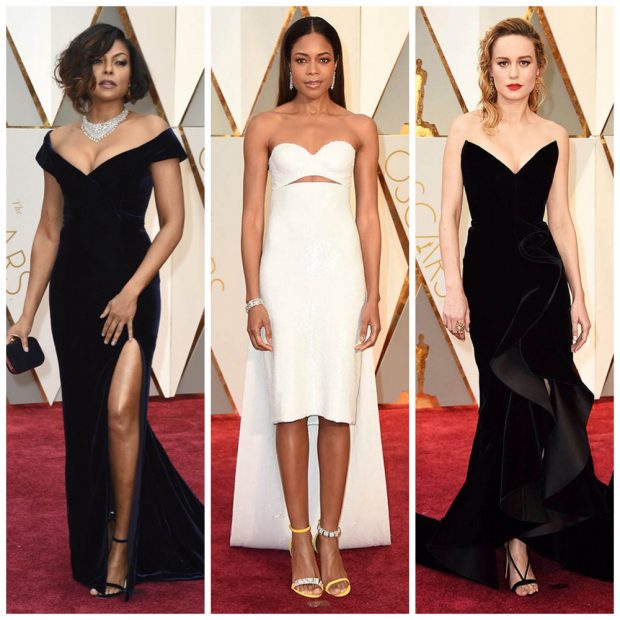 I don’t know anything about the logistics of red carpet arrivals. I assume there’s a hierarchy there, and the higher up you are, the later you get to arrive. This is why the tail end of every red carpet slide show is populated by TV presenters, before the recognisable but maybe not nameable faces start to trickle in, then BOOM, all of a sudden it’s a red carpet traffic jam and anyone who’s anyone comes pouring out of their limos at the same time. This is why Jennifer Lawrence can run into the Oscars five minutes before the show starts; Beyonce is always last to arrive at the Met Gala; and even after the BAFTAs had started I was still holding out hope that Ruth Negga was going to magically appear from somewhere and steal the red carpet.

For some bizarre reason, Ruth was one of the first to arrive at the 2017 Oscars, and when yours is one of the most eagerly anticipated dresses of the night, this is a strange move. I want to acclimatise myself with the trashier, more budget TV dresses and work my up up to the Valentinos and the Armanis, via the Zuhair Murads and the Christian Sirianos – like I’m grazing my way through a sartorial tasting menu.

Ruth messed up my courses last night, and I don’t think my palate recovered from it. I’ve already touched on her custom Valentino, and her inevitable disappointment (and mine!) that someone else had a very similar look. The year that happened to Anne Hathaway, she had a last minute change from her (coincidentally, also) Valentino into a pretty insipid, badly fitting Prada. Whether Ruth got a similar heads up and decided to just roll with her choice anyway we shall never know, but for my money hers was the stronger look, worn with more conviction. Her ruby accessories and makeup were just off-tone enough to make for an interesting clash rather than a matchy matchy vibe, and the whole look was just so her that you couldn’t help but love it.

As I wrote for the Irish Examiner last week, she enjoys her clothes so much that it makes every red carpet outing a red carpet win. (I also made a wee prediction on her Oscar choice, and as it happens I was not far off!) This look was no exception. It was the drama this Oscars red carpet so badly needed, unfortunately delivered too soon.

Which left Taraji P. Henson free to shut down the red carpet when she arrived in this Alberta Ferretti showstopper.

You almost never get a red carpet dress that’s a unanimous win. Even today I’ve been scrolling on Instagram and I’m shocked to see people extolling the virtues of some of my least favourite looks from last night, but this dress? This is a winner. If there’s one dress from last night that going into the history books, it’s this one.

Much like Kiki Dunst she’s managed to take a classic silhouette and make it completely her own, with incredible styling by Jason Bolden.

There’s shutting down a red carpet and then there’s shutting it down, rolling it up, sticking it in your clutch and going home. Thank you Taraji P. Henson for giving us that gift.

A small sign of solidarity. I chose to wear a gown by a designer from a majority Muslim country. Thanks to @AshiStudio of Lebanon. #Oscars pic.twitter.com/CbEkK7rCpG

Ava chose to wear her heart on her sleeve and make a quiet political statement by wearing a dress by a Lebanese designer, and I think the simple fact of having it come from that differing point of view is what makes this look feel fresh and interesting. It’s a win, and again, it delivered that much needed “something different”.

There’s a fresh point of view too at Oscar de la Renta, and I think it shows in Brie Larson’s stunning velvet dress.

If nothing else, this wins Most Improved on last year’s Oscar appearance; in fact I’m shocked that this even the same person.

Last year, Brie’s stylist Cristina Erlich spoke about how they’re still finding her look. This is a direction I hope they explore more thoroughly. It was so unexpected from her that her arrival was an almost literal breath of fresh air.

A less successful foray into the unexpected came in the form of Naomie Harris’ Calvin Klein. We’ve established that Dior’s red carpet problems didn’t begin and end with Raf Simons, but red carpet dressing was certainly never his forté, and this look establishes that that is still the case at Calvin Klein.

To take it back once more to that all important point of view, I always felt Raf’s was too strong for Dior, and it’s probably naturally more aligned to the house values of Calvin Klein. However, dude never got a handle on the essential business of the red carpet and while I appreciate what this is trying to do, it’s too high concept (and too informal) for the Oscars.

An ol’ red carpet switcheroo — with her Vanity Fair dress (also Calvin Klein) at the Oscars and her Oscars dress at Vanity Fair — would have had more impact I think.

Come on Raf. Get with the programme.

2017 Oscars: What's good, Dior?
This is the most recent story