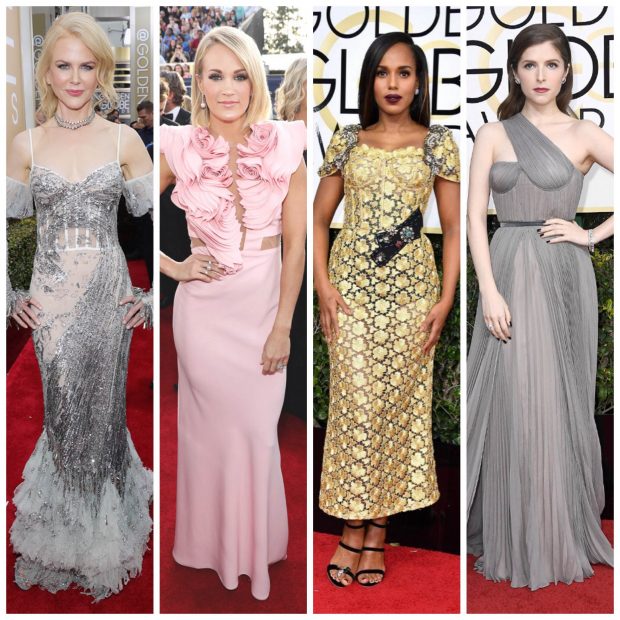 I’ve saved the Worst of the Worst for this post. For my money, Natalie Portman, Emily Ratajkowski, Naomi Campbell and Jessica Chastain could occupy this list too, but since they’ve already been covered in other posts, consider this a worst dressed version of the creme de la creme. A shite of the shite round up, if you will, of the 2017 Golden Globes most offensive looks. They may not be the worst dresses (Karrueche Tran takes that dubious honour for her inexplicably bad Dolce & Gabbana dress:

but fails to make this list because I don’t give a flying fuck what Karrueche Tran wears), but for various reasons, these are what I consider the night’s most unforgivably bad looks.

Oh, the dizzying highs and crashing lows of Nicole Kidman’s red carpet style. She is game, I’ll give her that, and it’s one of the reasons I’m always interested to see her on a red carpet (unlike, say, Sofia Vergara, who I wouldn’t care less if she never left her house again), but she does need to rein in her tendency to go for fussy and/or infantilising details and cuts. When she keeps it sharper, cleaner, more modern, she always looks the better for it; which isn’t to say she can’t have fun with her choices (that Met Gala McQueen was SO MUCH FUN), but is to say, girl, you’re not 20 anymore.

On the red carpet, she told a story about the provenance of this dress that’s almost as twee as the dress itself. She said she had a whole bunch of options, and her daughters chose this one because it made her look like a fairy (!), and I mean… enough said. The sleeves are awful. The frothy hem is equally awful. And the wave motif on the dress is already too much – don’t give us visible corsetry as well! It really is a one woman shit show.

And yet it doesn’t come close to the pure, unadulterated shitness of Carrie Underwood‘s Iris Serban… creation.

This one, I think, was unanimously hated. And with good reason. When the colour, cut, fit and finish are all shite, and the dress gives the wearer linebacker shoulders in the worst possible way, and the bodice frills are reminiscent of a fungal growth, you’ve got ask yourself – was there really not a better than this?

Remember that time scientists grew an ear on the back of a rat? Carrie Underwood doesn’t, because if she did she would not be wearing this dress.

I don’t even know why I’m surprised any more, because Kerry Washington has become one of those red carpet risk takers for whom the risk backfires more than it pays off. Sometimes there are saving graces in those failures, but this..? I got nothing. There is so much going on here, and none of it is doing her any favours. The lace is a horrible colour, the dress is a horrible length. Can we have ornate cap sleeves OR an embellished bow; a lace bodice OR visible corsetry; a frumpy length OR frumpy granny pants/spanx that end under the bust.

This was made for her, so there’s no reason it couldn’t have been lined to remove the distraction of the black shapewear. I guess the saving grace, as always with Kerry, is that face.

I mean, God. Somebody took the term “over the shoulder boulder holder” and ran with it.

This is just awful. It’s Vionnet, and it’s the result of somebody’s determination to take a classic dress and give it a twist, which is not something I would object to in theory. However, when that “twist” involves harnessing Anna Kendrick’s left breast and twisting it into the centre of her chest?