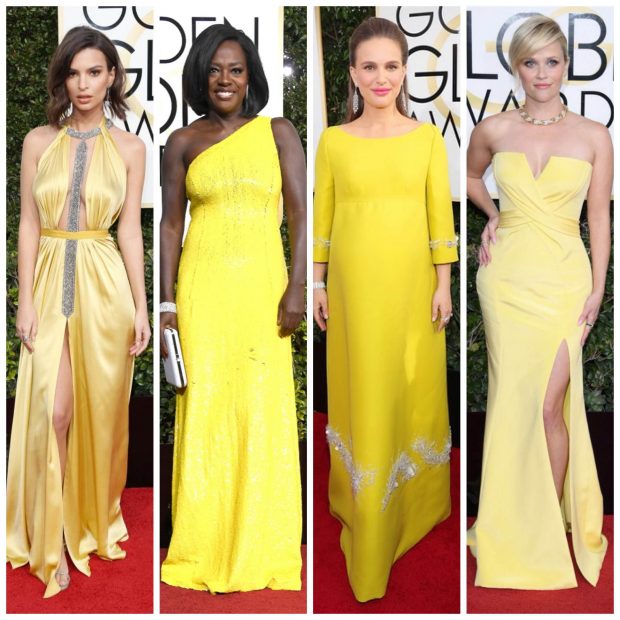 Yellow makes a big impact on the red carpet, and the 2017 Golden Globes had plenty to go around.

Viola Davis looks nothing short of amazing in her sequinned Michael Kors. Simple, sporty cuts (those shoulders!) in strong blocks of colour are her red carpet forté, and if it’s not broke, don’t fix it. This yellow is one of her shining moments.

For Emily Ratajkowski, borrowing from Paris Hilton’s wardrobe, circa 2004 seems to be her thing. This Reem Acra dress is appallingly ugly, and where Viola’s dress is lifted by that glorious canary yellow, this Reem Acra is cheapened by a sickly, washed out tone.

I mean, you wouldn’t think a dress with a cut away front, a cut away back, a thigh high slit, and a crystal encrusted neck tie attached to the groin could be cheapened by anything, but you live and learn.

Maisie Williams scored a win in her Ong-Oaj Parem gown:

Bonus points for her hun-believable hair and makeup!

Are we sure she’s not Irish? Surely we can claim her on the strength of that bun?

I think I know all the things she was going for here, and I suspect giant skittle was not one of them. She wanted regal, elegant, with a hint of retro – Jackie, Jackie, a bit of Jackie, and maybe, just to remind everyone (ahem, Academy, ahem) how great she was playing Jackie, should we have a hint of Jackie coming though? Seriously, she might as well have worn a bloody “For your consideration” Natalie Portman campaign t-shirt, that’s how subtle this is.

And as a look, it’s evoking the 60s about as subtly as Natalie is begging for an Oscar. When a dress is this overtly retro, the styling shouldn’t be so literal. The hair, the jewellery – something could be employed to give it a modern edge. They might argue that bright pink lip is enough, but I would disagree. Anyway, I don’t want you to think I’m on the fence about this one – I hate it. Not unlike Natalie, it’s po-faced and it takes itself far too seriously.

My favourite yellow, however, was this:

Reese Witherspoon‘s epic tenth anniversary call back to her iconic Golden Globes red carpet moment. You know the one. It was 2007, she had just douched Ryan Phillipe out of her life, and she rocked the Globes red carpet in a flirty little cocktail dress and break up bangs.

It’s another of my favourite yellow dresses, and I love her for reminding me of it just as Big Little Lies is about to drop on HBO; just when I need reminding that I used to be interested in Reese Witherspoon, that Reese Witherspoon does more than just sit around drinking iced tea in cute sundresses and hawking that Draper James southern lifestyle on Instagram.

Isn’t this great though? It’s Atelier Versace. It’s the sophisticated, big sister look to that little yellow cocktail dress. The yellow gold torque is amazing with it, and that heavy, side swept fringe tops it off beautifully. As a look, it’s pretty much perfect; as a marketing tactic, it’s subtle as a sledge hammer, but some obvious plays are just easier to stomach than others.