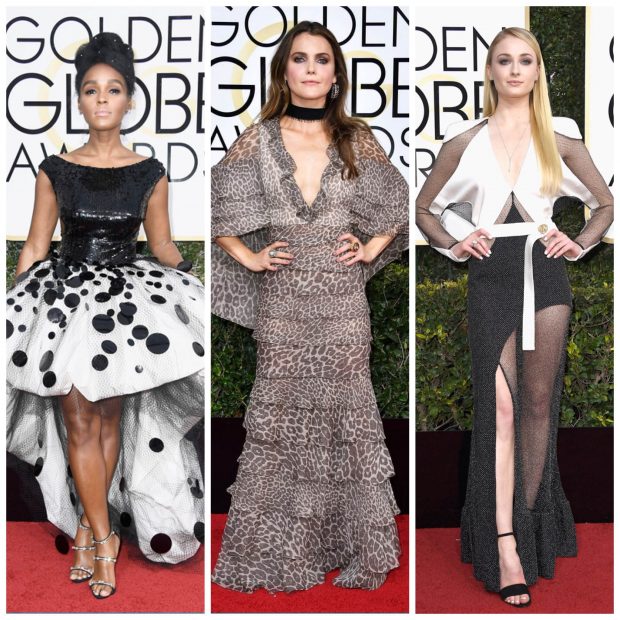 As previously mentioned, the 2017 Golden Globes red carpet felt risker than most. Some of those risks paid off, some of them… not so much.

But for a mainstream awards season red carpet, this is risky and tremendously fun. I love it. When you’ve got a sequinned bodice with a monochrome, net, puffball, polka dot skirt, the last thing it needs is to be high-low to boot, but Janelle always goes big or goes home with her red carpet concepts, and this is BIG. It’s all in. It calls to mind the Armani Privé Fall ’14 collection, which is the last time I recall them being this reckless with polka dots and tulle. (See Exhibit A, B, C, D, and so on…) That collection was a joy to behold then, and this call back is a joy to behold now. I like to imagine that Janelle Monae had some of those images on a Pinterest board, just biding her time. Visionaries are like that.

Gosh this in an interesting game she’s playing. She’s tall, thin and blonde, and she could so easily go the conventional style route, but her stylist, Rebecca Corbin Murray, is at pains to set her apart form the tall, thin, blonde Hollywood brigade. And I take my hat off to Sophie for running with it. Which is not to say this particular risk paid off. This dress is both confusing and confused, and unlike Janelle Monae, I don’t think she’s established her style persona strongly enough to pull something like this off at the Golden Globes.

Keri Russell in… doesn’t matter, I love it.

God. More of this please. Three years after writing this post, I’m still hooked on the Americans and Keri Russell remains my eternal style crush. (Update, I did not buy leather trousers or a biker jacket, but I did start wearing lipstick and it changed my life.) Anyway, the point is, Keri Russell could basically roll in horse manure, turn up on a red carpet, and I’d be like “Love it! Need it! Gonna try it!” Objectively I’m not crazy about this J. Mendel dress – or perhaps I just think the choker and the hair are a bit heavy for it? In combination with the tiers and the caped effect it’s a lot to take in; with a lighter jewellery option and hair up (“HOW DARE YOU??” – everyone in the world) it could really lift the look. However, it’s delightfully unconventional, and she is totally pulling it off, style witch that she is.

PS – She was also delightfully, visibly hammered at the after parties. When I move to Hollywood and try to become BFFs with her, should I dress like her or not? Answers on a postcard, please.

Making Sunday’s Golden Globes a three lady tux night, Octavia Spencer wore a navy tux designed by her friend, Laura Boschi; and she basically killed it too. I would like to see a third button lower down on the jacket for balance, and maybe slightly less cut-away in the curve of the jacket hem so the crotch has a bit more coverage, but those are minor points, and I loved seeing her in this. She told Ellen DeGeneres on Monday that, freed from the scourge of her spanx, she had more fun at these awards than she ever has before – and if that’s not argument enough to make the lady tux happen, I don’t know what is.

Chrissy Metz in NOT Christian Siriano

Ohhhhhh! SCANDAL! So the deal was, This is Us star Chrissy Metz was supposed to be wearing Christian Siriano on Sunday. As revealed in a video they filmed for E!, he designed and custom made two options for her, which she even modelled for the cameras, going on at length about what a dream come true it was to work with the designer.

But then – *record scratch* – she turned up on Sunday night and was clearly NOT wearing either of the dresses from the video. She WAS wearing an arguably much prettier, deep purple, very on-trend velvet gown by Nathanial Paul, ANOTHER Project Runway alum. Siriano has since released a statement, explaining: “They chose to go another way after we made two custom options. It’s unfortunate that her team decided to do so much pre-press about us working together; I advised against it.”

I actually think she did both of them a favour here. She picked the best dress for her – because let’s be honest, neither of the two Christian Siriano dresses was especially great – leaving him with a flawless run on the Golden Globes red carpet. Her reasoning was that she wanted to be comfortable, she loves purple, and why the hell not? And though I absolutely think she made the right decision, I can’t help thinking that in burning her bridges with one of the only red carpet designers who’s willing to create plus-size gowns, Chrissy Metz took maybe the biggest fashion risk of the night. Sad but true.