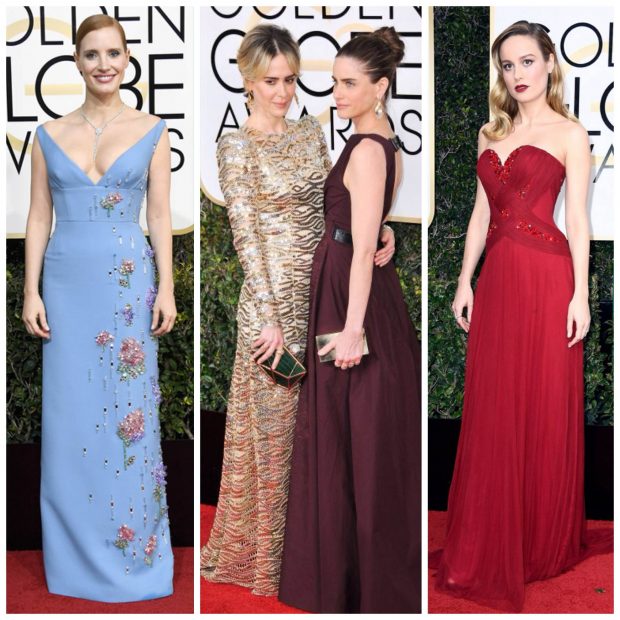 The 2017 Golden Globes red carpet brought some WTF moments. Not all of them fashion related.

Sarah Paulson and Amanda Peet are a couple now?? WTF??

Actually, they’re not. They’re just very handsy best friends and they have form in sharing some red carpet smooches. I’m not sure why they need to go there, but whatever. If I was in close proximity to Amanda Peet I’d probably want to kiss her too, so on to the dresses. They both look – fine, I guess? Sarah Paulson shares a stylist (Karla Welch) with Ruth Negga, and I’m surprised she put them both in heavily sequinned, gold-toned looks. I actually prefer the more flattering shape and fuller skirt of Sarah’s Marc Jacobs dress, but Ruth’s was the stronger look. This is a bit of a Monet: I like the overall look from a distance, but once you zoom in, I wish the sequins were richer, heavier, and less tiger striped. Amanda’s Bottega Veneta is a fantastic colour, and… there’s not much more to say about it really. Both dresses benefit from hugely from what’s going on in the back.

As red carpet looks go, I accept that this one comes off as very strong, overall. It’s a great and very flattering shape, and the pared back styling works beautifully: diamond studs, no other jewellery; deep red lip, soft Hollywood wave. It’s hard to find fault here. But the dress is Rodarte?? W. T. Actual F?? In short, it looks like it came from the same off-the-rack occasion wear line as her Gucci Oscars dress from last year (and you can revisit my thoughts on that here). It’s a decent, mid-range priced off-the-rack line, to be sure – like, maybe this retails at €500 – but, like the Oscars Gucci, it’s serviceable, but nothing special (and not a patch on her 2016 Golden Globes look).

Judith Light is a Balmain-bot?? WTF??

Jessica Biel was allowed a moment to shine on the red carpet?? WTF??

Serial spotlight-hogger, Justin Timberlake – whose tomfoolery gave birth to the least romantic wedding portrait of all time – actually stepped aside (kind of) and let his wife have a moment to bask in her red carpet win. Her dress is Elie Saab couture, and though I prefer how they styled it on the catwalk (it really benefits from the addition of that heavy, statement necklace that manages to bring the embroidery and embellishment into focus), it’s a great dress. I would like it even better if it was this dress, but I live in hope that someone will give that an outing before awards season is done.

God I have so many issues with this look. The colour is awful, and the last thing that colour needs is sickly sweet floral beading in pink and lilac running down one side. The neckline is WTF? (seriously, how are those straps staying on her shoulders, and why weren’t they cut to actually go on her shoulders? Even just a little bit?) The bodice construction and fit is WTF? (at the very least it could look like it’s cupping her breasts. Instead they look like they’ve been squashed into submission) The shoes are WTF? (Satin platforms THAT HIGH, and still the dress is too long?) That choice of necklace is WTF? (On screen this looked like a trickle of sweat dripping down between her boobs, and really – is this a look that’s calling for an accessory that highlights her cleavage??) I suspect this an unpopular opinion, but seriously, look at this and tell me: how much do you want to grab those shoulder straps, hoick it all up, take the straps in and up by an inch, give her a necklace that draws the eye up rather than down, and give her some less matchy matchy shoes to finish it off?

No? Only me? Fine then. But I shall not be moved.