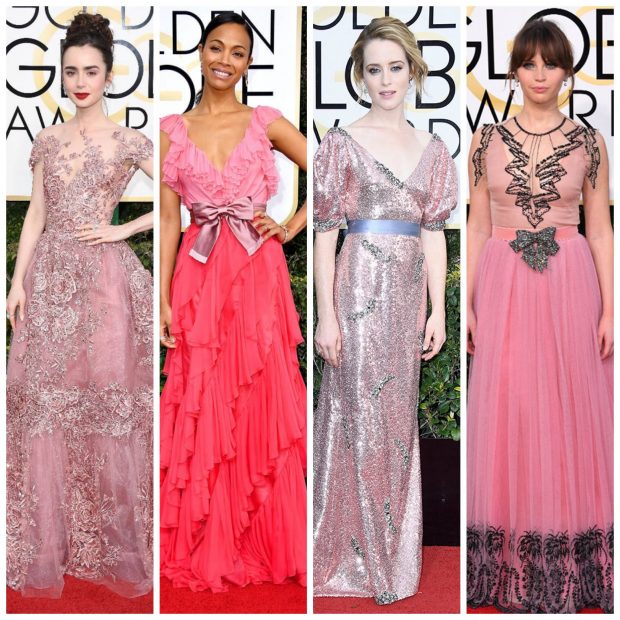 Though pink and yellow were vying to be the colour of the night at the 2017 Golden Globes, pink – in shades from bubblegum to baby – just about took it home.

To which I say: that is some shoddy PR, Gucci, some very shoddy PR. I’m a fan of some Alessandro Michele quirk on the red carpet; he’s brought the joy back to fashion and it can be a beautiful thing to behold, but the impact of any designer at an event is watered down with each additional person they dress. Tom Ford knows this and has a strict one person per event policy, and I would say no brand more than Gucci should take heed of this strategy. That Michele quirk might be best enjoyed in small doses; as evidenced by this showing, too much of it and it starts to feel less like quirk and more like an affectation, particularly when two dresses at one event share so much of the same conceptual DNA. It starts to make a visionary look more like a one trick pony, and if Michele can show 70 looks on a catwalk and have them all feel cohesive but radically different, something like this just comes down to bad PR management.

In this particular face off, Zoe comes out on top. Not only does her dress have more punch, but Gucci under Michele is one of those brands that needs to be worn with conviction. It may be that Felicity is simply not feeling it, but something here is off.

Maybe it just needed punchier makeup or stronger accessories? On paper, it should be a dream, Erdem is one of those designers I’m always happy to see on the red carpet, but in reality it’s a snooze. Also, I fear someone thought it would be teddibly clevah to go with puff sleeves and a regal blue sash – that’s sooooo Her Madge! – but it’s not.

Packing a little more punch (but only a little) is Connie Britton (who continues to have the best hair in Hollywood – sigh) in a peachy pink Georges Hobeika with an embroidered bodice.

It’s basically fine, and on the one hand if you have hair like Connie Britton, maybe its fine for your dress to be just fine. On the other hand, with hair like that, don’t you want your dress to be more than just fine? I feel like her hair is up there, going “Ok dress, I’m sick of doing all the heavy lifting. I bring my A game every time. What are YOU doing??”

Bringing her A game from her head to her toes (actually not quite to her toes, the shoes were awful), Lily Collins delighted me in her Zuhair Murad princess dress. On paper I should DESPISE this! Zuhair Murad? Princess dress? Rambling roses? Illusion netting? PINK? And yet, consider me charmed.

In fact – inexplicably – it’s one of my favourite looks of the night. I know, I feel like I don’t know me anymore either, but I think the hair and makeup is doing a lot to win me over here.

That and the fact that she reminds me of a young Krysten Ritter, which is maybe the magic ingredient that is making this feel like an edgy look to me, when in fact it’s practically off a Disney character board.

Angela Bassett is kinda killing it in this coral Christian Siriano:

Whereas I feel like this Versace dress is maybe trying to kill Naomi Campbell?

Good luck with that, dress.

But hey, you didn’t expect Chris Brown’s ex to have taste, did you?