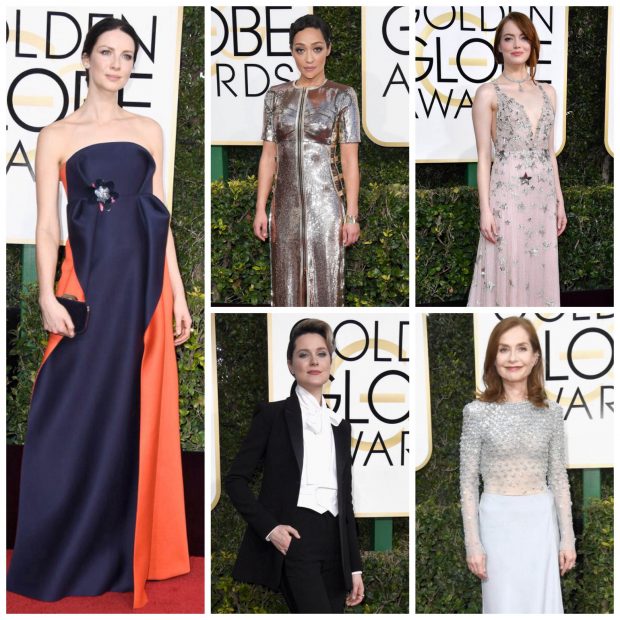 So, I first set eyes on this, not on the red carpet (as IF the asinine live streamed US red carpet coverage would bother with a 63-year-old French actress), but when she pulled off the upset of the night by beating Natalie Portman to the award for Best Actress in a drama.

The camera cut to Huppert, seated at her table, twinkling in a crystal covered bodice, and I thought, of course. Chanel. How French! Then she stood up and I caught sight of the ice blue wrap skirt and figured, hmmm. Maybe not.

It is, in fact, Armani Privé, and I hope she’s not hanged for treason because it’s gorgeous. It’s a skirt and top, and while the skirt is not my favourite thing the world (kinda bland, not fitting great, could stand to sit, like, half an inch higher on the waist) and I wish they’d figured out a way to keep the top tucked in sans wrinkles, it’s just so damned casually elegant that I can’t help but love it. You know when blogs go on and on about “French Girls”, with click bait-y tweets like “How to wear trainers like a French Girl”, and you’re like, hmmm… I think there’s more than one type of French girl wearing more than one type of trainers for more than one type of reason. But you look at Isabelle, at 63 years of age, and you realise EXACTLY why those tweets are such effective click bait. Fucking French girls. Women. Whatever. They’ve just got it.

Is Emma Stone a secret French girl? Because she’s just got it too. Her custom Valentino is also casually elegant and deceptively simple. What looks at a distance like a micro-pleated or crepe effect in the fabric is actually row upon row of teeny tiny beads, and the embellishment continues with a mix of beaded, sequinned and foil stars.

La La Land is a contemporary celebration of Old Hollywood, and I love how this dress alludes to that with a lightness of touch that Natalie Portman & Co. could learn from. Her whole look — with her asymmetrical up do and soft pinks on the face — is utterly charming, and this was a lesson in how to wear baby pink without it seeming overly girly or twee.

I’ll admit, having been blown away by Ruth Negga’s red carpet game this past few months, I was initially a little disappointed to see her hit the Golden Globes red carpet in this boxy, metallic number. This should have been her Lupita moment, I thought, and this dress was not delivering.

However, on closer inspection, there is more to this dress than meets the eye. If that fails to translate on the red carpet then it’s still a questionable win, at best, but seeing images of this from later in the night — and in a video her stylist, Karla Welch, posted to Instagram — I was much more impressed than when those initial images came through. The leather trims, the strapping, the tonal effects in the sequins (which are actually predominantly bronze with gold accents), this is a much more complex design than the dress itself first suggests.

What ultimately pushes this into the territory of a win, though, is the uber simple styling; the wave in her hair, smokey plum eye, nude lip and simple gold cuff. Combined with the complexity of the dress, they give that much needed edge that pushes it beyond “sequinned gold column” into glamourous but edgy Fem-bot territory — a space we haven’t yet seen Ruth occupy. That element of surprise, plus the ease with which she occupies it, equals legit red carpet moment.

If there’s one thing better than a lady tux, it’s a dandified lady tux, tailored. To. Perfection. I love this SO MUCH.

The temptation when starlets wear suits is to sex them up a bit (see, for example, Kathryn Hahn with sexy bed head and sexy leather bra). This goes to the opposite extreme but still manages to be one of the sexiest looks of the night, complete with waistcoat, pussy bow blouse and Meryl Streep’s Devil Wears Prada hair. It’s absolutely sensational, and probably would have been my look of the night, if not for…

Delpozo, one of the most consistently interesting fashion houses out there, and possibly the most criminally underused on the red carpet. Caitriona’s dress (with added embellishment) is from their 2017 Pre-Fall collection, and seriously, in that range alone there are at least five dresses that would have come close to the magnificence of this. (Swoon, swoon, swoon some more.)

Their exceptional use of colour is showcased brilliantly here, and the addition of the single focal point of embellishment is deliciously understated. Their draping is combined with exceptional tailoring to ensure that the dress fits and falls EXACTLY as was intended (ahem, Roland Mouret), with stiff folds of fabric that look simultaneously heavy and utterly weightless. It’s quite simply a beautiful, beautiful dress, subtly avant-garde, retro without feeling derivative, and in that wonderful regal tone. This is the dress Natalie Portman’s Prada wishes it was, and for me, the best dress of the 2017 Golden Globes.