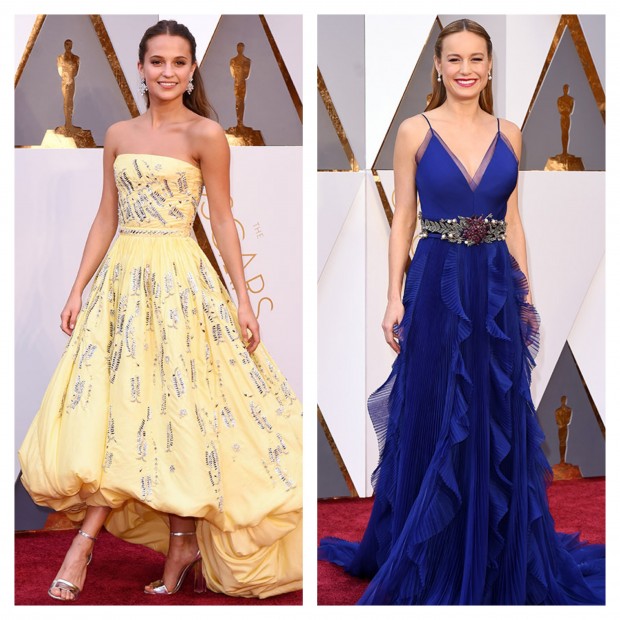 Well this was unexpected.

This was totally expected. Written in the stars, even. But these:

these dresses on our best actresses… These were unexpected.

The Business of Fashion ran a fascinating article today in which uber-stylist Leslie Fremar reveals the extent to which a “collaboration” between stylist and designer can in fact be largely dictated by the stylist’s vision. We saw it when Lupita won Best Supporting Actress back in 2014, and her “Nairobi blue” Prada was not only the least Prada-like Prada ever, it also saw Lupita take quite a sharp right turn into princess territory, almost as if part of the vision for her look that night was to create something befitting an Oscar winner, taking the long view and picturing her gown alongside the classic Hollywood favourites of the last century when history revisits her win.

Lupita’s stylist, Micaela Erlanger admitted the dress was the result of “a collaboration”, which, having read the Business of Fashion article, I’m now going to take to mean “designed by the stylist, made by the fashion house”. And these two gowns, this year, to me, seem like “collaborations”. a) They’re custom, and b) they don’t feel “of” the houses from whence they came. Alicia Vikander’s is Louis Vuitton, a brand she has remained loyal to all season, with usually edgy, forward looking, not necessarily crowd pleasing results. Brie Larson, on the other hand, has played fast and loose with her designers all season, and really could have gone with anyone. That she ended up in this, and that this is Gucci – it’s mystifying.

Normally I’m a fan of colour on the red carpet, but this shade of blue, because it’s in a chiffon, just screams budget, and those waterfall ruffles don’t help its case in that department. It really looks like something that would show up in an ad in your Facebook sidebar, and you’d order it from China, and the general idea would be there, but the ruffles would be more limp and less flowy than these; the bodice would gape and the straps would cut into your shoulders; the belt would have three plastic crystals around a sequinned patch in the middle, and you’d shake another crystal out of the envelope. And you’d go, well… what did I expect for $90? and you’d give it to a charity shop.

Perhaps that’s the budget version of what happened here, and it arrived from Gucci being serviceable and striking, but not necessarily something you would want people looking back on in 50 years thinking – the way we think now, “Oh, Audrey Hepburn wore a costume from Roman Holiday to collect her Oscar! How quaint!” – “Oh, Brie Larson ordered her dress on ebay! How progressive!” She seems like a genuinely warm and wonderful person, and she has had some standout moments this season, so I wish she had a better legacy than that.

I also don’t like her hair, which plays perfectly with the dress, but for all the wrong reasons. The look – lets call it suburban teen goes to the prom – was styled by Christina Erlich, and it makes me legitimately sad. Not possible extinction of Orangutangs sad, but like… sad.

And Alicia’s Louis Vuitton… That colour is too pretty to make anyone sad, but it’s definitely not making me happy the way Soairse Ronan or Margot Robbie did. Again, with the hair, the colour, the shape, the embellishment… the overall look screams “prom”, and while its constituent parts aren’t offensive as Brie’s, I’m just as mystified that the same stylist (Viktoria Sekrier) and the same designer who put her in embellished leather for the BAFTAs, decided for the Oscars to go for something Twitter gleefully embraced as having “major Belle vibes”.

Alicia Vikander looks like a Disney dream at the Oscars https://t.co/1z5GrgrFHQ pic.twitter.com/6dhI4xpTMR

Belle vibes are not a good thing. Even Taylor Swift doesn’t do Belle vibes anymore. Maybe this is the emerging trend we’ve been looking for… the princessification of the winning actresses? Interestingly though, Vikander had a return to form at the Vanity Fair party.

Not saying this would have been a better Oscars choice, but to paraphrase Taylor, this at least is “aesthetically cohesive” with how she’s been building her fashion brand. And Brie too went for a polar opposite look for Vanity Fair: a slouchy, toga-esque, peachy/pinky velvet number from Monse.

Again, I like it better than the Oscar dress, the hair is better, the concept is stronger. Though this wouldn’t have been the right option for her Oscar dress, it’s moving in the right direction (i.e. AWAY from the Gucci).

But look at this radiant, gorgeous girl and tell me she didn’t have any better options for the biggest night of her life.

(PS – Loving the Converse. For real.) 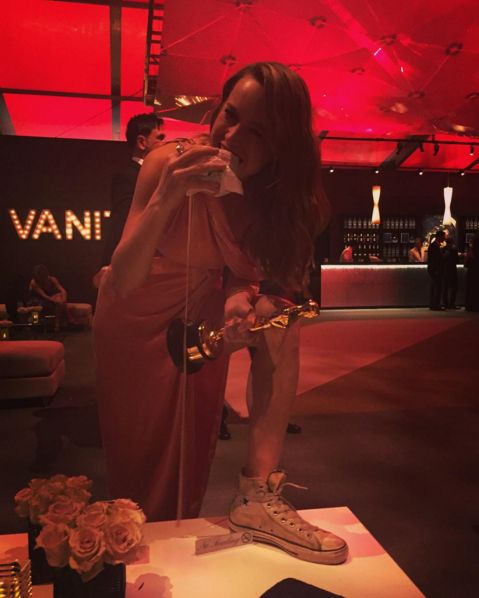