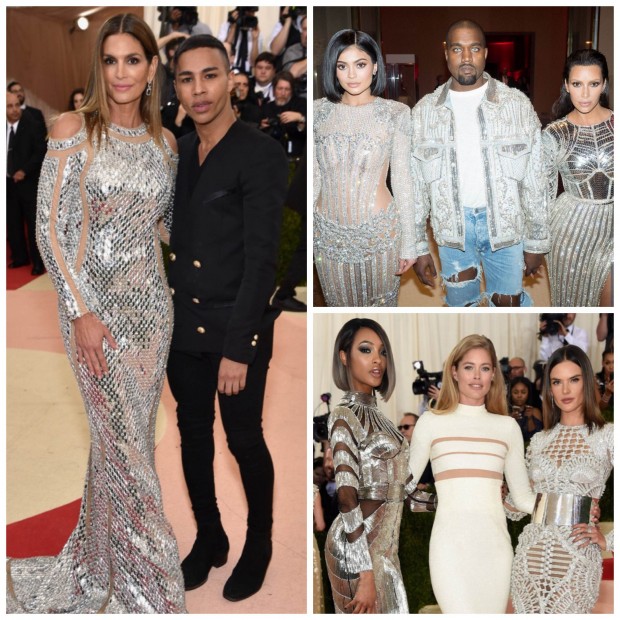 Seriously, if I read the phrase “Balmain Army” one more time today my eyes are liable to roll out of my head.

Not since the advent of ISIS have I wished so hard for a self-proclaimed “army” to be just taken out, in one swift, lethal manoeuvre. At this point in time it’s possible that I’ve come to despise this brand even more than Marchesa, and if you’ve ever so much as glanced at this blog before you’ll know how much I hate Marchesa. But whereas it’s expected that Harvey will ensure a proliferation of Marchesa hits the awards season red carpets, those of us who try to avoid a certain family can usually avoid being exposed to a high enough density of Balmain for it to be truly offensive.

Last night at the Met Gala it was truly offensive.

It should surprise no one that Olivier Rousteing, who has roughly three ideas – baroque excess and woven corsetry melded into the 80s power suit of your worst nightmares – and who made one dress for a Kardashian about three years ago and has been recycling it for the rest of them ever since, would take the least imaginative approach to the 2016 Met Gala theme: Olivier saw “Machina” and thought robot, and the world’s gaudiest army since the Napoleonic wars was born.

If he had just enlisted Cindy and the models it might have been palatable, but naturally the army also included Kris and Kylie Jenner, Kylie’s beau Tyga, Kim and Kanye, as well as Olivier himself, and male model Sean Opry – giving us, in total, two sparkly jackets and eight sparkly dresses, seven of them silver toned. Obviously, the term “overkill” is meaningless in Balmain HQ, but out here in the real world, that counts as serious overkill. And it’s a shame, because on paper Jourdan Dunn’s look counts as one of my favourites of the night.

The styling – with her grey toned hair and smokey eye – is really strong, and the elongated bugle beads used on the the dress lend it a classier, more art deco feel, with the overall vibe of an updated Metropolis. In isolation, it’s quite something, and to see it, solo, on Rousteing’s Instagram was to know that you were looking at a showstopper. The problem on the red carpet was that the effect was diluted by too much of the same – a simple explanation that could perhaps be applied to much of what I dislike about Olivier’s approach to Balmain generally. I don’t happen to like what he makes, but there’s no denying that artistry and innovation abounds in his designs, and with some careful editing he could have owned this carpet instead of his offering feeling like a giant cliché.

If it began and ended here, with some of his stronger ideas used to maximum effect:

Instead we got an added contingent of Balmain-bots who brought us every conceivable variation on the robot theme:

Showgirl 1.0, the prototype for that model, was also wheeled out for the occasion…

Along with the male variant.

Both were removed from the event when the male began to malfunction upon hearing that the entertainer Bette Midler would also be in attendance.

Throw in Tyga, in a sequinned Balmain baseball jacket (there’s a combination of words that will have Pierre Balmain spinning in his grave):

and you just have to wonder why nobody is pressing stop, or even pause, before the integrity of the house of Balmain is lost forever.