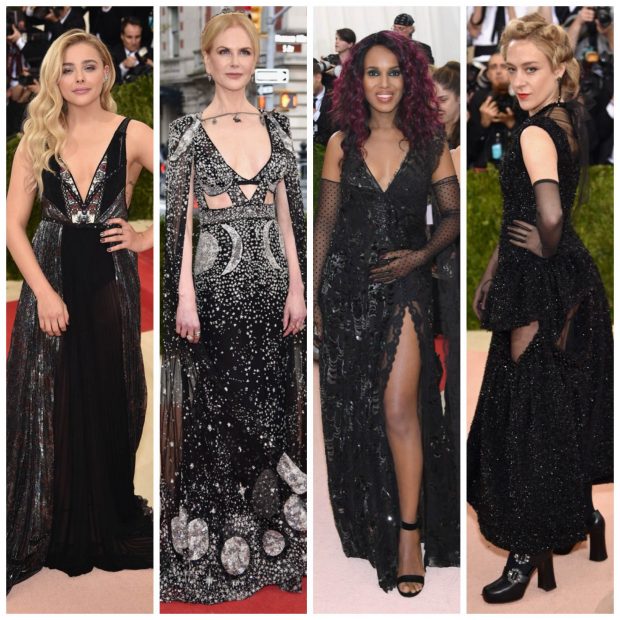 Welcome to the witching hour, where black is never basic.

As a committed wear of black, I’m generally not of the opinion that black is ever basic. (I’m wearing black to the VIP Style Awards tomorrow night. Yes, courtesy of Lancome, I’m going to the VIP Style Awards tomorrow night! And I hope someone writes a really bitchy blog post about my outfit!) However, I can appreciate that it’s a tricky colour to pull off on the red carpet because, yes it’s flattering, always, but it also has a tendency to suck up all the light and photograph as a flat black mass, where structural and embellishment details are lost forever to those millions of critical eyes that roll at the first glimpse of “more boring black”. But most of Monday’s black dresses came with a wicked little twist in the form of a distinctly witchy vibe, and for the most part, I loved it.

Because the theme was the future (it wasn’t) and the future = silver (it doesn’t), Stuart Vevers at Coach decided to add a little sparkle to their girl Chloe Moretz’s black pleated v neck gown in the form of a silver foil-effect floral fabric.

And because they were confused about the theme, they then added some folksy details at the neckline, and I don’t know that that makes a whole lot of sense in the context of the dress as a whole, but I do know that if you added some bishop sleeves to this thing and threw a velvet kimono over it, it would have Stevie Nicks written all over it, and that’s good enough for me.

Is it good enough for the Met Gala? Not really. It’s just not “enough”, period (but try telling that to poor Tavi Gevinson, who wishes she could Stevie Nicks the hell out this), unlike this next dress, which is plenty!

This majestic work of art is Alexander McQueen, and if this is what they’re doing over there when they’re not busy making coats for Kate Middleton then Jesus, someone make Kate Middleton get her coats from somewhere else.

It’s a very welcome return to the Met Gala for Nicole Kidman, who I am never not happy to see on a red carpet because she knows how to play this game. Almost every year without fail I bemoan the lack of McQueen at the Met Gala, and I often wonder if Bee Shaffer demands a certain level of exclusivity from them (she is very loyal, and a prominent guest, so I guess she has a point), but this year we got two! It’s not exactly an embarrassment of riches, but when one of them looks like this – on Nicole, who knows how to work it, and looks softer of face than she has done in a while – I’ll take what I can get. A top ten contender, for sure.

Unlike our next witchy woman, who almost went into the Shudda, Wudda, Cudda post, until I realised that it’s actually been a really long time since I was excited about anything Kerry Washington wore on the red carpet. In my head she occupies the space of someone a little bit daring, a little bit playful, up for taking a risk, but who gets it right more than she gets it wrong.

Lately I think the scales have tipped the other way. Her Oscars dress was criminally bad, and this… I’m really not feeling this. It’s possibly the hair, in that shade that really shouldn’t be worn by anyone out of their teens, unless that’s their whole thing. And that’s really not Kerry Washington’s whole thing.

And yes, if ever there’s a time to ditch your whole thing and embrace a whole other thing, it’s the Met Gala, but this is not the thing you want to turn to for that.

Kerry should be mad that Marc Jacobs gave a better dress to Bette Midler.

With the circular sequin motif reminiscent of cogs in a machine, this hits the theme on the head, and many a bright young fashion thing at this years’s Met Gala could learn a thing or two from the way she’s wearing that headpiece. It’s brilliantly subtle and she wears it with aplomb.

It’s an accessory that practically says out loud “Bitch please”, should a Kardashian so much as glance in her direction.

Getting plenty of second glances, I’m sure, in her deceptively demure Simone Rocha dress, was Chloe Sevigny. 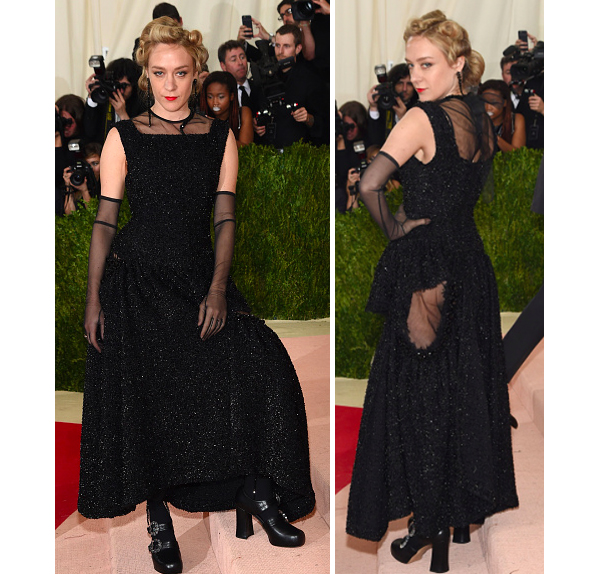 I’m excited to see Simone’s experimental view point on such a high profile red carpet, and her playful but conceptual approach is so suited to an event like the Met Gala. This look gives us machina in the stitched up, tailored fit of the bodice, manus in the draping and ripping of the skirt, and madness in those clunky, buckled boots; it’s perfect – cheeky, dramatic, playful and on theme. I could do without the Marie-Antoinette/saloon girl hair, but I can’t say it doesn’t finish off the look with a bang.

From ye-olde timey witch to Haim, who came as a whole Coven.

Not gonna lie to you, I don’t know who’s who here, and I don’t care. I know one of them is called Este, if that ups my credibility at all? And I know they’re wearing the work of a couple of sisters I can tell apart, Kate and Laura Mulleavy of Rodarte. I’m always happy to see a bit of Rodarte, happier still if it’s on my Kiki, Kirsten Dunst, whose Death Star dress from 2014 was one of my top looks from that year. Kiki has the chutzpah for Rodarte, you see. She gets it.

Haim… not so much. They look like a trio of drippy little nymphs from a hipster production of A Midsummer Night’s Dream, a coven too good to be bad, too millennial to be wicked.

Chloe Sevigny would eat them for breakfast. 90s girls 4Eva.