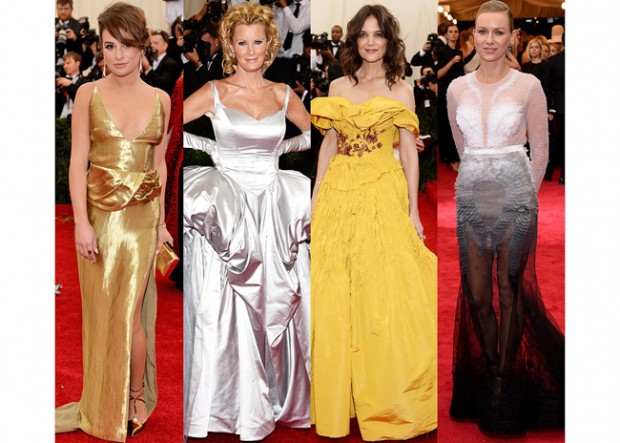 This category popped into my head as soon as I saw Zoe Saldana turn up at the Met Gala with Michael Kors. These are the ones that seem to have understood the assignment, but wound up with an F.

The problem with Zoe Saldana is that she has a pretty stellar reputation to uphold. Girl knows how to bring the drama, wear the hell out of a dress and own a red carpet. I had high expectations for her tonight, and this Michael Kors is just not cutting it.

Fine, it has some poof, but it’s an ill considered kind of poof, that looks for all the world like she’s wrapped her lower half in an Ikea duvet and called it a night. Even her hair is half-assed; this is just not the Zoe Saldana I know and love! And her Kors-mate Jessica Paré is not faring much better. For starters I take issue with the fact that the two dresses look a little too similar, but mostly I can’t stand how bland this is. There is nothing else to even say about it.

Unlike our next Fail, which… where to even start? In one sense I’m happy that Marchesa redeemed themselves in my eyes, because liking Karolina Kurkova’s dress left me in a very uncomfortable place, so the fact that the rest of their Met offerings were a veritable shit show of pure fug restored a much needed sense of balance to my universe.

What to do with Katie Holmes, who, in fashion terms, is like a wayward child. Must try harder, has so much potential, why can’t she just find someone who can tell her how to dress and do what she’s told? The problem is she doesn’t acknowledge her assy taste, in fact, far from it, she actually went so far as to try to forge a career as a designer, as if other people might want in on that. It’s bewildering, but then again, if Marchesa can do it, maybe anyone can.

Someone who does know his away around a great dress is Valentino, so this dull, muddy mess on Kate Mara is inexcusable. I hate the pattern, I hate the texture, and when you have a shape like this that gets done to death you need something striking enough to lift it out of the ordinary – a stronger colour, some contrast, some shimmer, something, anything! It has a cape, a pleasant surprise which is squandered because, again, it just blends in to the sameness of it all.

Someone who never blends in is Lea Michelle, and when she tweeted a sneak peek of her dress fabric early on Monday I thought, “Oh no, please do not let her dress be gold lamé!” Of course I was forgetting this was Lea Michelle so naturally her dress was gold lamé!

For $25k a ticket I’m assuming there’s an open bar, so that weird tummy pouch is probably not where she’s keeping her drink money, but is instead an attempt by the designer, Altazurra, to incorporate into the dress an element of draping worthy of a couture master. He failed, it looks tacked on to add interest to an otherwise simple dress; it’s heavy handed and awkward looking, it doesn’t suit the silhouette, and from the side it looks like she just won WrestleMania.

Looking at Hayden Panettiere’s Denis Basso dress I’m reassured by the fact that at least she didn’t pay for it. This is one that definitely tried to embrace the theme and pay homage to a master, but it’s just not enough… anything, to actually make the grade. It’s not big enough to be big, the colour is not strong enough to register as colour, and that massively oversized floral print could be amazing if they’d had the balls to up the contrast a bit. It’s an almost, but they lacked the courage to really go for it.

Unlike Sandra Lee who, Jesus Christ, could not have gone for it any harder if she was playing a fairy godmother in the Gaiety panto. While she clearly embraced the theme wholeheartedly, this dress is a horror. Made by her friend Dara Lamb, with the cheap looking satin and general lack of refinement in the details, it ends up looking derivative, and it didn’t surprise me to read just now that there was a particular dress from the Charles James collection that they were, um, inspired by. 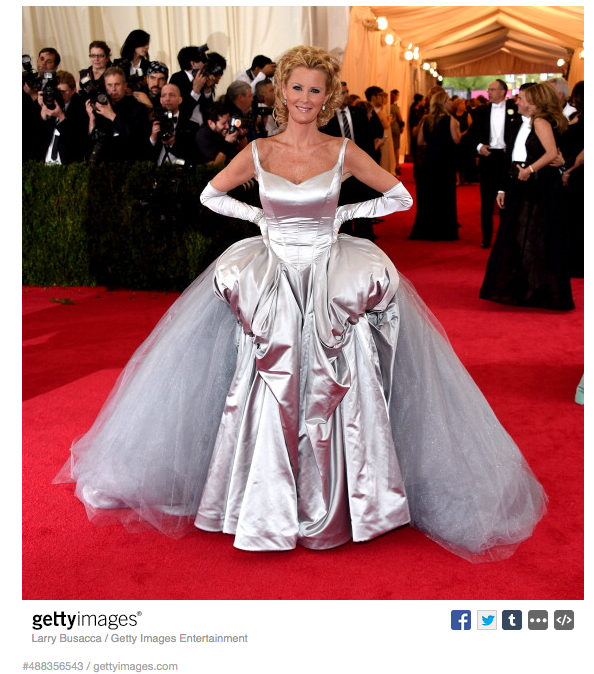 I was really unsure whether to put Naomi Watts into this post or the next one, The Ones That Didn’t Get It, because it’s easy to see that this Givenchy dress is a hot mess, but it’s difficult to know if it became a hot mess in a failed bid to pay homage to Charles James. I’m leaning towards the latter, because it’s a great shape and there’s a lot of gorgeous detail in it, and while Naomi rarely puts a foot wrong on the red carpet, she likes a challenging dress and is not afraid of taking a risk, so I think she would have been up for trying something interesting. But somewhere around the mid thigh it all just goes to shit, and the severe ombré effect combined with the sheerness is creating too stark a contrast for something so soft on the top. 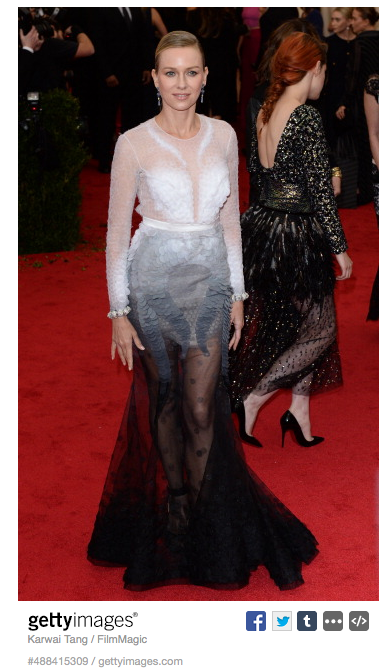 Stay tuned for “The Ones That Didn’t Get It” where we’ll review the attendees who kinda misunderstood the assignment!