In other words, the best of the rest from the designers who understood that for the Met Gala, a COSTUME gala with a THEME, there is something of a brief, and you should work to it. 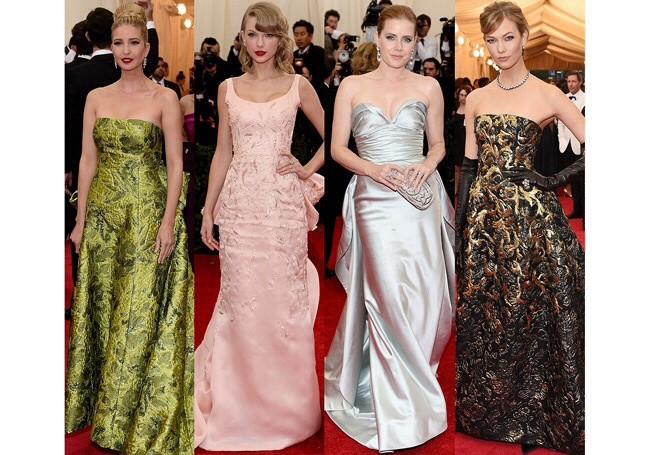 At some point last night it began to feel like every second dress on the red carpet was another Oscar la de Renta. That wasn’t actually the case, but he certainly dressed more attendees than any other single designer, and although none of his other dresses were as delightfully whimsical as Sarah Jessica Parker’s, most of them were opulent enough to more than meet the brief. Oscar de la Renta has provided plenty of dresses for Met Galas of the past, and they haven’t always been well suited to the theme, so in that sense it has to be acknowledged that it was just a lucky coincidence that this theme was so naturally suited to his aesthetic, and so it’s not surprising that so many ladies turned to him last night. 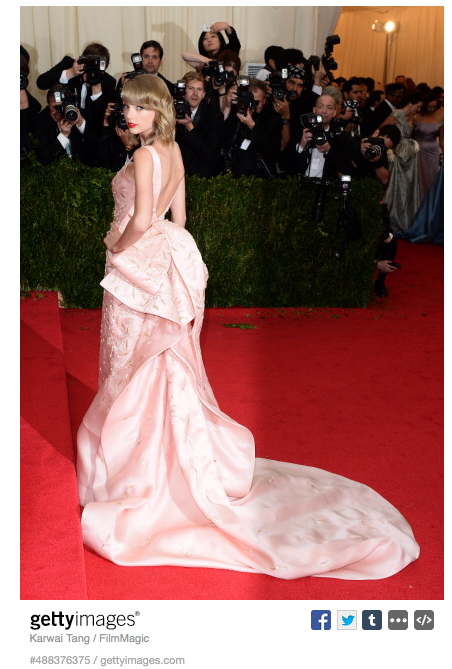 Taylor Swift never met a princess dress she didn’t love, and for the past few months she has been stepping out round New York styled like a modern day version of a character from a Salinger story, so I can only imagine how thrilled she was with the chance to play a high society debutante last night. 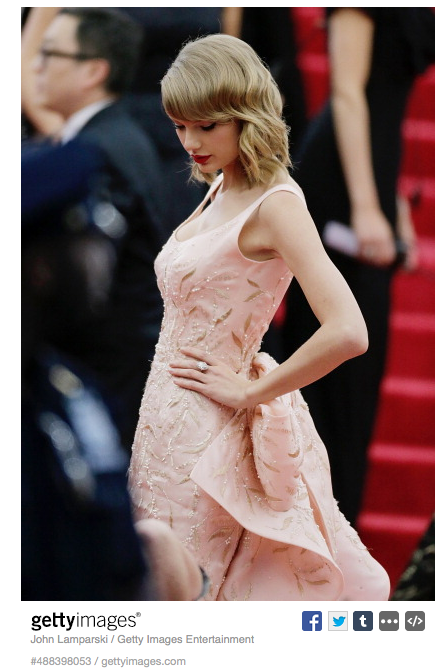 And Oscar obliged in grand style. This dress is sumptuous and feminine, and at any other event I would be rolling my eyes at Talyor in a pink jeweled gown, but in the context of last night I have to admit it’s kind of perfect for her. 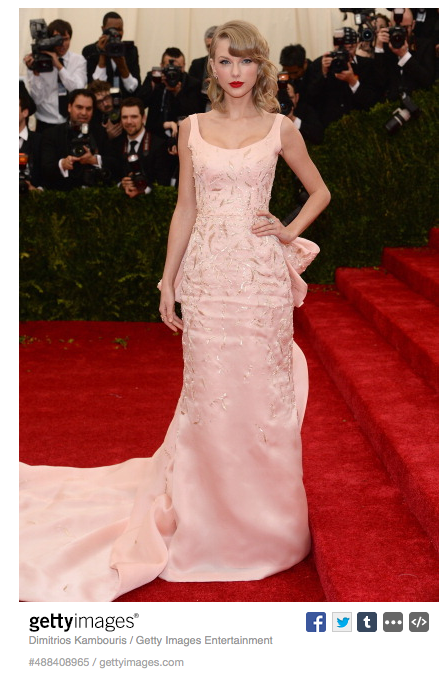 Taylor goes through best friends like the rest of us go through underwear, and her current bestie is Taylor look-alike Karlie Kloss. Karlie looked amazing in this gold brocade dress with elbow length leather gloves and some pointed pumps. 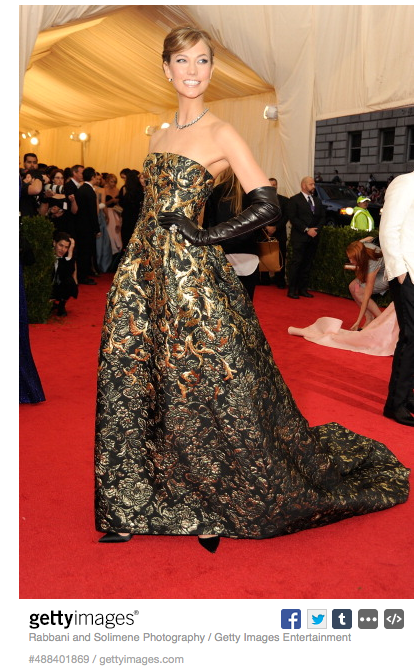 It’s a more grown up elegance than Taylor’s, and she worked it like the pro that is with gorgeous hair and make up. 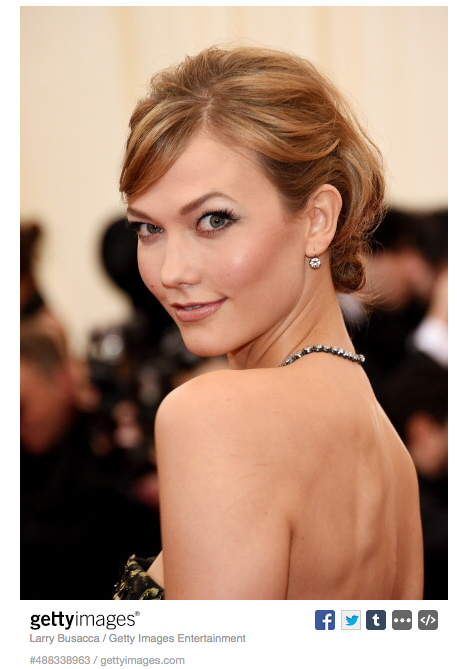 Amy Adams used to be a fan of the kind of rouching and folding that’s going on in this dress, and in the last year a change of stylist has seen her go for a more streamlined, minimal look that really suits her. But this dress is amazing, it looks like liquid and fits like a dream. 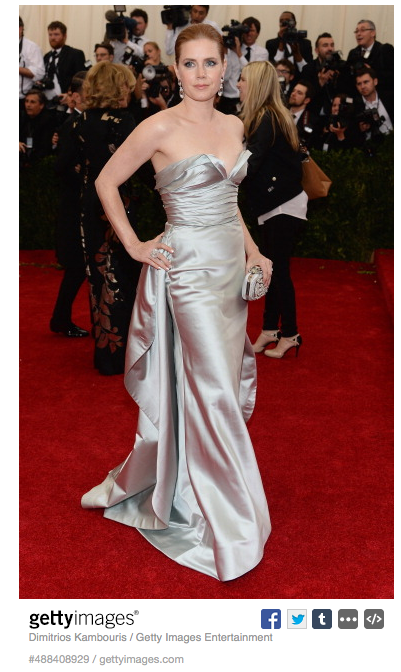 There were a few more Oscar girls, but I wasn’t especially taken with Alison William’s red/orange/coral sheath or Claire Danes’ Dynasty-esque burgundy velvet bodice and lavender skirt, so, for the welcome pop of colour, the last of my Oscar girls is Ivanka Trump. The fabric in this is so beautiful, and the shape is simple enough to let the colour sing. 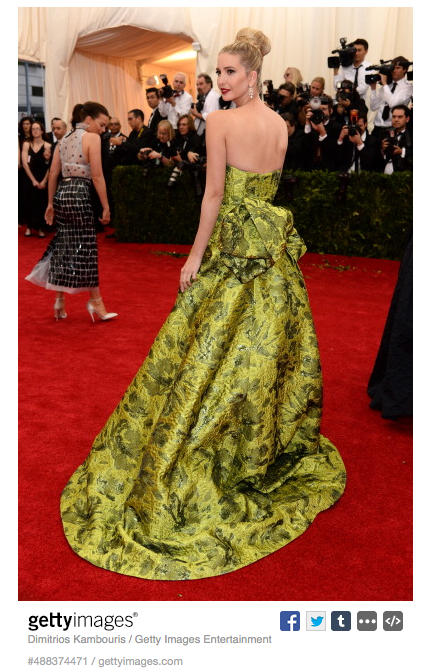 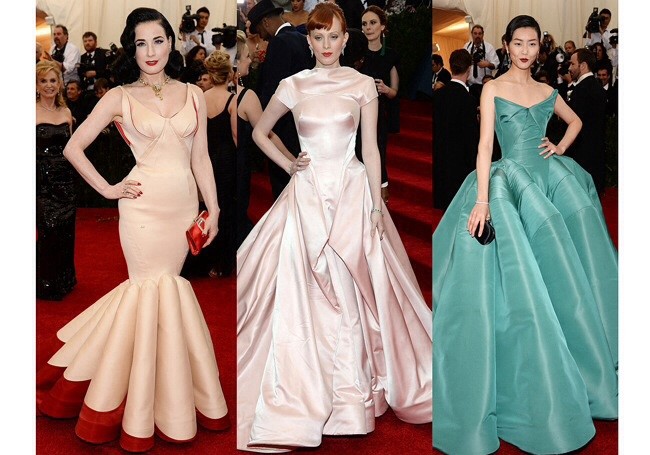 Even a stopped clock is right twice a day, and sooner or later an event was going to come along that required exactly the kind of over-the-top folded, pleated, oragamied, fishtailed, corseted, slashed, piped, draped, gravity defying thing that Zac Posen does, which is normally just too much and too predictable every other time he does it. 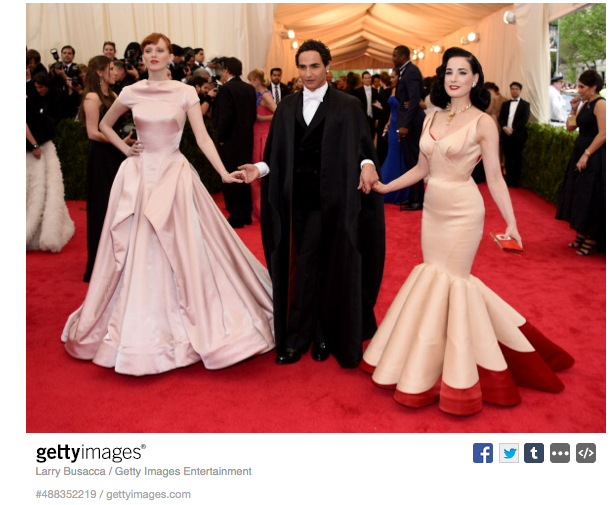 Last night was his night, and given how much he could have gone to town with that theme, what he ended up doing was actually quite restrained. Karen Elson’s dress in particular has an elegant softness to it that you don’t normally associate with Zac Posen, Dita’s is pretty much what you would expect from him and from her, and from the waist down those tubular folds are giving Liu Wen a bit of an Ursula the Sea Witch vibe. And yet, again in the context of last night, I don’t hate it, and I’m in such a generous mood that I’ll even let Zac’s Eton schoolmaster cape go uncommented upon. No, actually I can’t… he looks like a wanker. 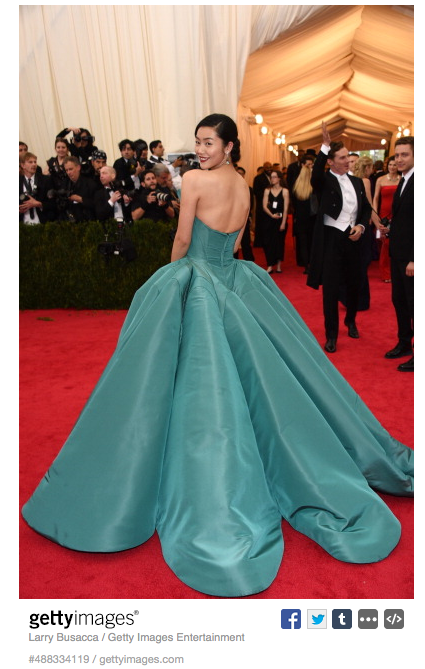 Another designer who’s aesthetic was already well suited to the theme of the night was Carolina Herrera, and this jumbo floral printed gown on Emmy Rossum is something we’ve seen before from her. 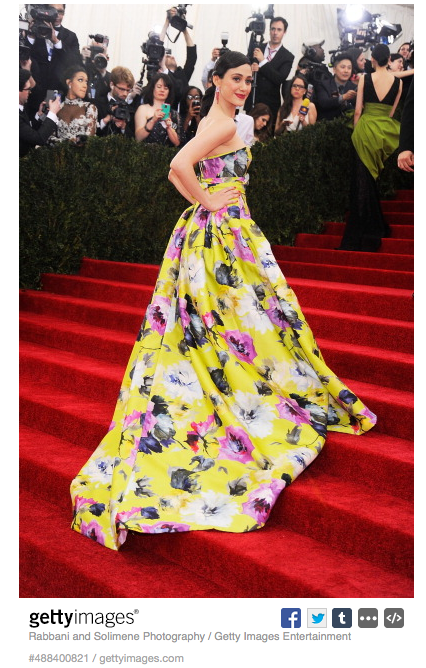 The shape is nothing special, so it’s the print that lifts this from mediocrity to one of the notable wins.

Likewise, this brilliantly bonkers Valentino outfit on Maggie Gyllenhaal lifted my sagging spirits as soon as I saw it. The print might not be to everyone’s taste, and a full length shirt dress with matching cape in an eye-boggling op-art print sounds pretty awful on paper, but someone needed to inject some excitement into a stream of predictable fashion, and by God this did it. 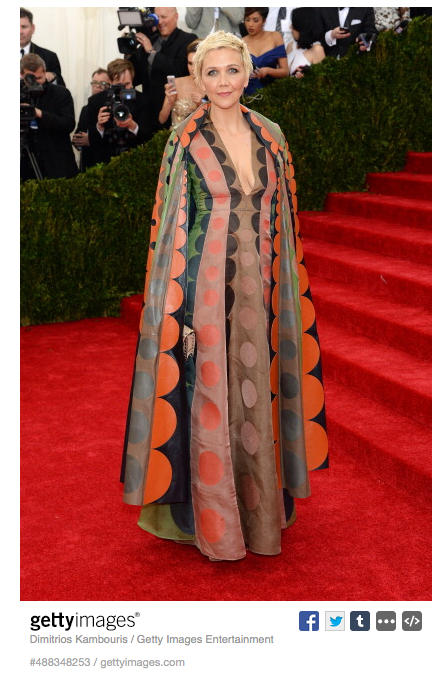 And speaking of of op-art, this fantastic Christopher Kane dress on Net-a-porter founder Natalie Massenet would have gone into my top five if I had’t just spotted it an hour ago. 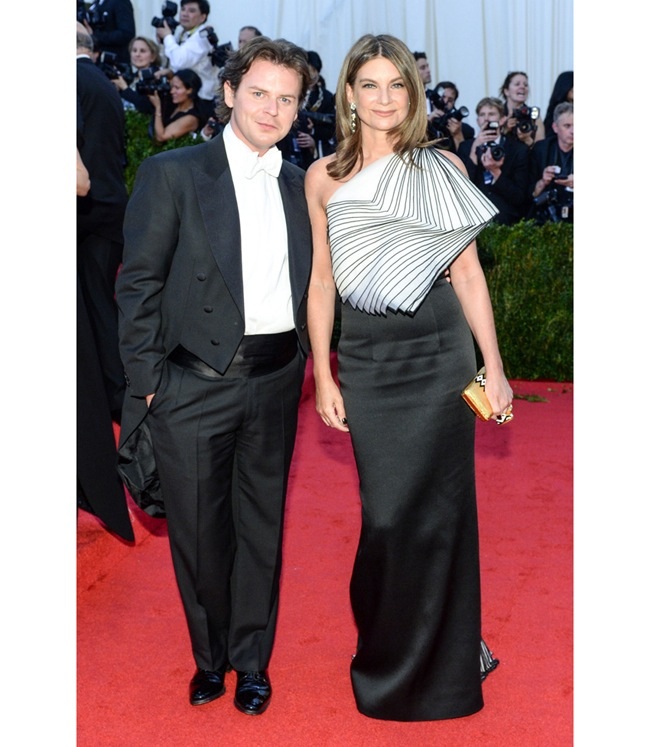 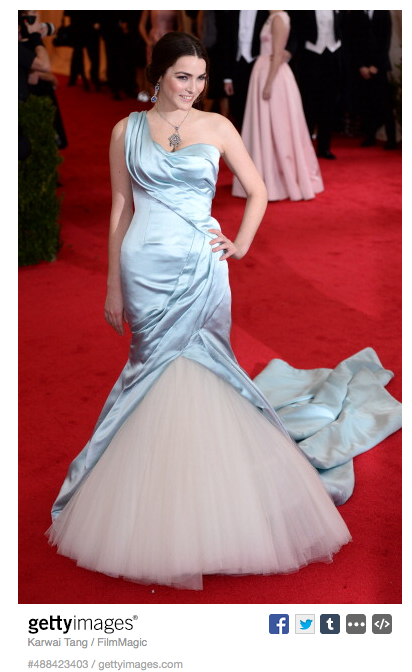 It’s a nice dress, but that singular eruption of tulle at the front doesn’t photograph well and I hope it moved better than it looked when it was stationary. It’s so strange that the last two Met Galas have seen only one McQueen offering each, absurd even, when you consider that last year’s theme was Punk, and I wonder if the fact that McQueen’s most famous customer is now Kate Middleton is making them seem a bit vanilla. It’s a theory that this particular dress does nothing to contradict, but there’s an indisputable artistry still, and it has to make the list.

Another that has to make the list, and trust me, this is KILLING ME, is Karolina Kurkova in Marchesa. 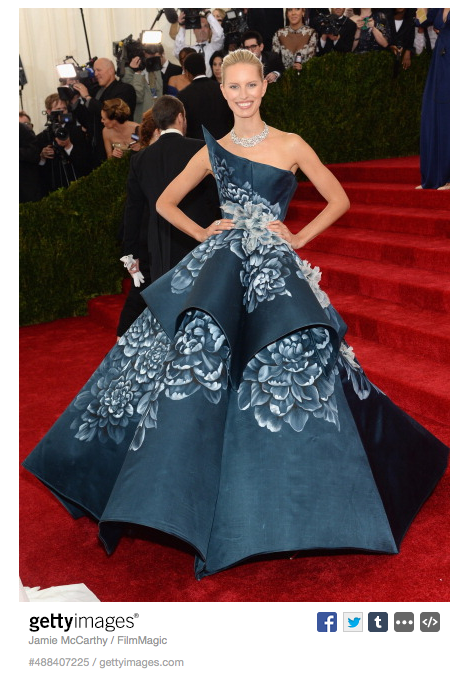 I am not a fan of Marchesa, I am never a fan of Marchesa, and theirs is a type of artistry I have no appreciation for, but – and again IN THE CONTEXT OF LAST NIGHT – this is pretty spectacular. See? We all have to be accommodating when it comes to observing a theme.

Coming up later… The Ones That Got It, But It Didn’t Work.