2014 Met Gala: The Ones Who Really Got It, And It Just Worked 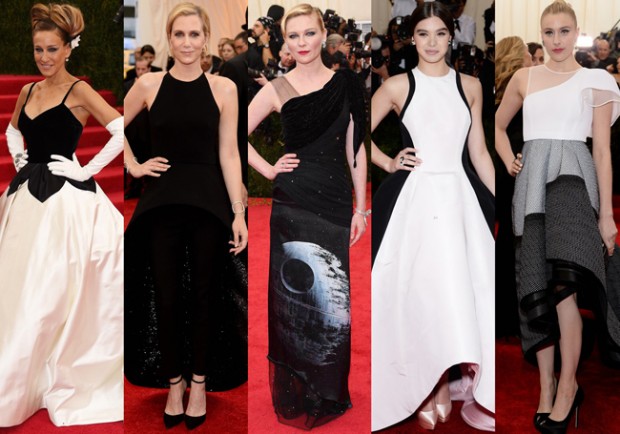 So fashion’s biggest night is over, and once again I’m left wondering if these people who actually get to go to it care about the Met Gala the way we, the ones who will never get to go to it, care about the Met Gala. I’m reminded again of Gwyneth Paltrow’s moaning response to it last year: wah wah, too crowded, too hot, she’s never going again, etc… And while we all know that Gwyneth’s raison d’etre is to continuously say things that make us normals want to consciously uncouple our brains from our skulls, when you look at the red carpet arrivals and see just how many people made absolutely no effort to adhere to the theme or embrace the spirit of the event, you have to wonder if, for once, she might be articulating an opinion that’s shared by her equally over-privileged peers.

I also recall Natalie Portman talking about her wedding dress one time, and saying it was no big deal for her because she’s worn so many spectacular dresses in her life that she’s kind of over the whole dress up thing. While the rest of us can’t even imagine a scenario in which we’d be offered a $25,000 ticket to an exclusive fashion event, with the chance to step into a fantastical couture creation, and our response would be “Meh, I don’t wanna go, it’s too hot there,” the simple fact is that, for most of the attendees, this is just one more night to get dressed up, and though the spirit of the event should give them an impetus to push the fashion envelope, they’re simply too jaded to be bothered.

The other consideration is that most people are attending as a guest of the designer they’re wearing, so if someone’s shelling out $25k for your ticket and giving you a dress, how much say do you really have? And given that the event exists to celebrate excellence, originality and ingenuity in fashion and costume design, it’s really the designers we should be looking to to push that envelope. It’s costume, it’s supposed to be theatrical and thrilling, and plucking a look right off your runway just doesn’t cut it. This is a night to go big or go home, say no to the cocktail dress, say no to safe and pretty, embrace the theme and treat it like the world’s fanciest fancy dress party.

And the person who always kills it on this night, who always works to the theme, who always picks the right designer, who always goes big and always has fun is the undisputed Queen of the Met Gala, Sarah Jessica Parker. 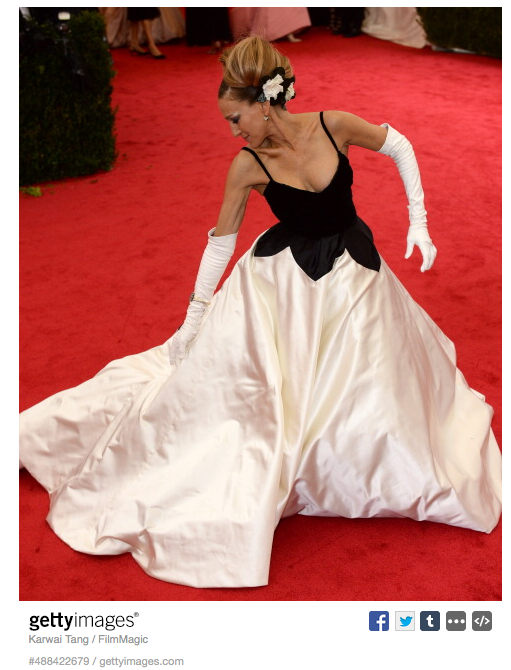 I just could not love this more. It’s the right amount of playful, the right amount of pouf, and the perfect amount of unbridled joy from SJP who knows she owns this event by now. If any designer was going to capably emulate the skill of Charles James, if any designer is steeped enough in the legacy of the clean, structural, elegant, American high-society approach to couture, it’s Oscar de la Renta, and of all the women he dressed, only Sarah Jessica Parker would appreciate the wit and the drama of this dress. 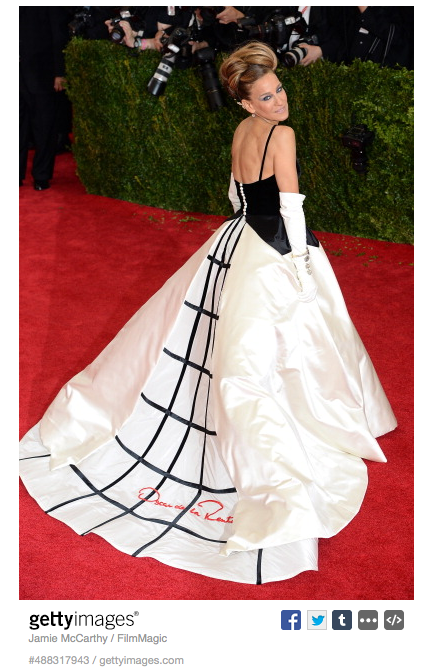 She was among the first to arrive, and she set the bar so unreasonably high that practically everything that followed was a disappointment. 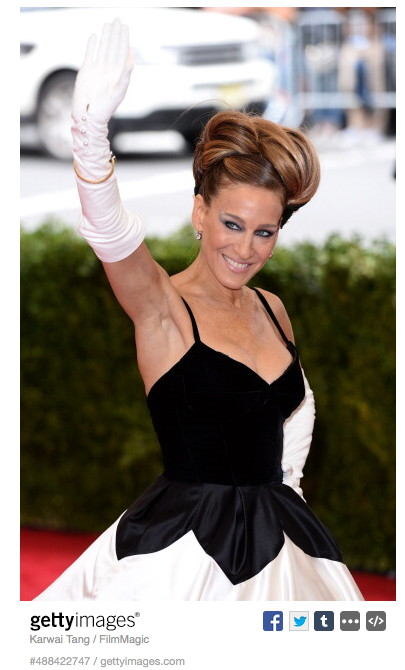 Practically everything, but not everything. Hot on her heels was Hailee Steinfeld, and between them they gave me high hopes that this would be the Met Gala to end all Met Galas. Hailee’s Prabal Gurung gown is stunning, and youthful enough for a teenager whilst being chic enough to pay homage to a great couturier. 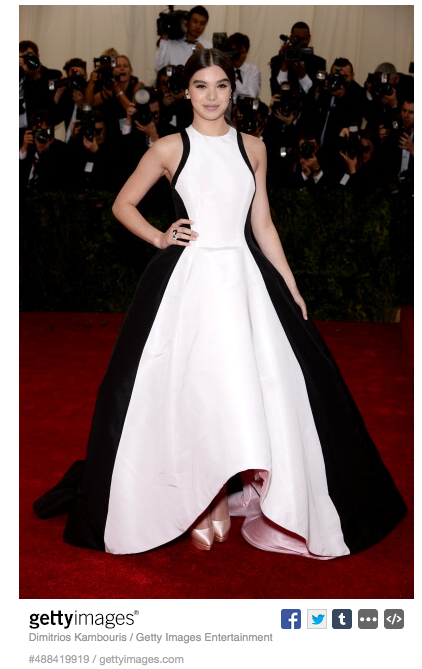 What makes this so magnificent is that, asides from the gorgeous cut and the playful details like the stand of the skirt and the peek of pink lining beneath, this is a very contemporary take on the aesthetic and technical abilities of Charles James, and rather than feeling derivative of his technique, as some of the big ball gowns did, this feels like a thoroughly modern dress that’s been informed by a grand tradition of couture. 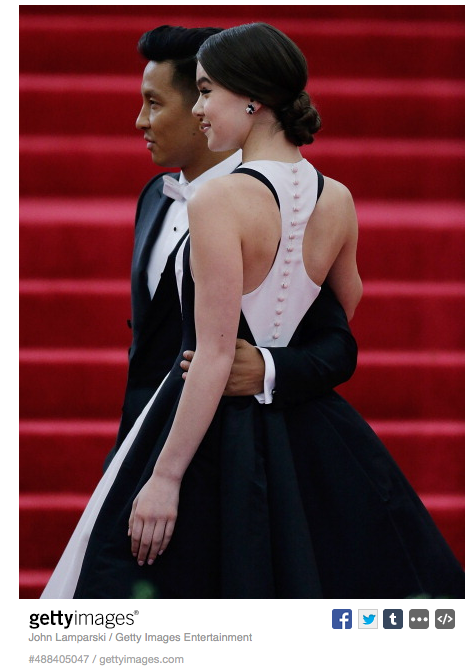 And at 17, Hailee is not too jaded to enjoy the experience of wearing something so grand and her attitude becomes her. 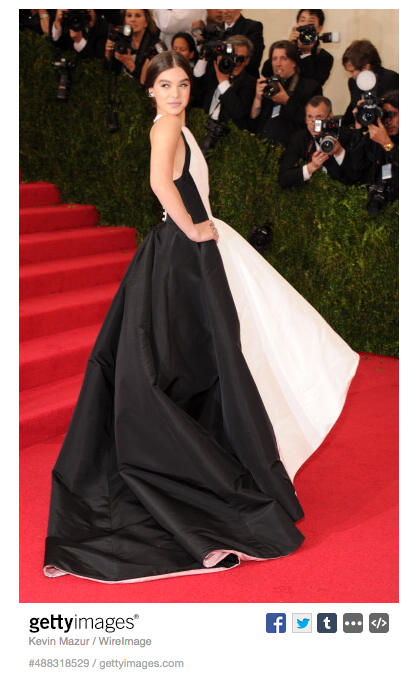 Someone else who managed the tricky task of paying homage to the theme, staying true to the heritage of his brand and injecting his own unmistakable twist was Alexander Wang. He dressed Kristen Wiig in this Balenciaga dress over trousers, and I love it. 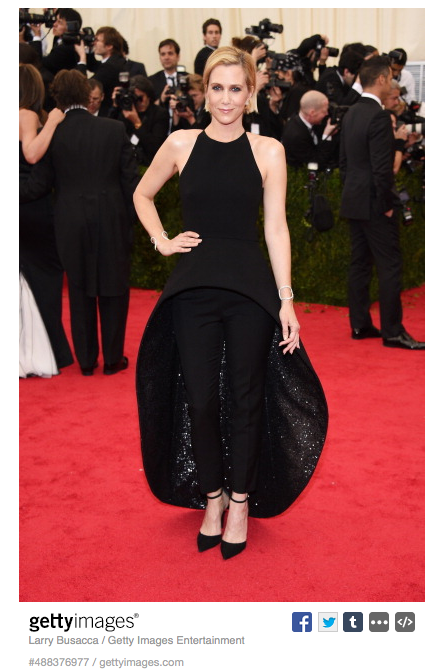 On a normal red carpet, at a premiere or a less fashion oriented event I might be so-so on this, but for this occasion she managed not only to wear what I think might be the best look I’ve ever seen her in, but she did minimal, modern and trousers better than anyone else, and I was not expecting that from Kristen Wiig. Whoever usually styles her should look to Wang more often and ditch the fussy tea dresses and tulle flapper styles she usually goes for in favour of a more pared back look. 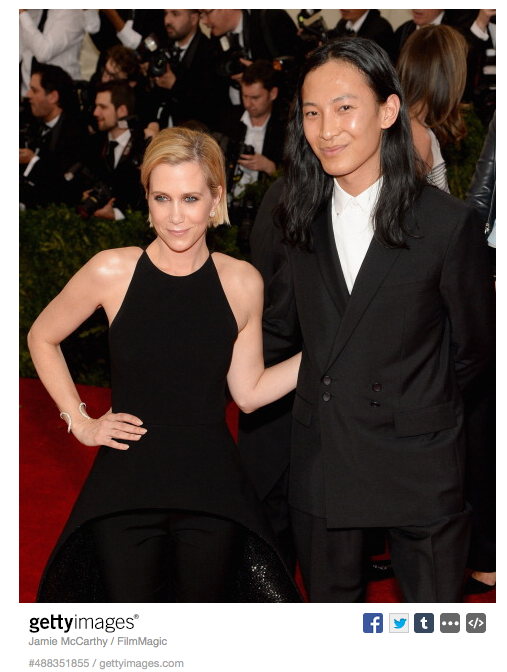 The same could be said for Greta Gerwig, who sometimes leans towards the overgrown child look herself, but last night, in Olivier Theyskens, she too nailed it in a look that captured the structural influences of Charles James in a very contemporary feeling way. 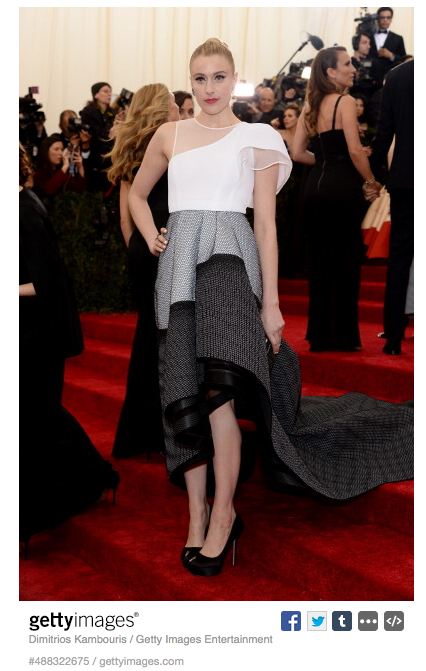 And finally, in a look that was plucked off the runway rather than being custom made for the event, Kirsten Dunst worked the hell out of Rodarte’s Death Star dress, which, to me, looks like it could have been designed specifically with last night’s theme in mind. 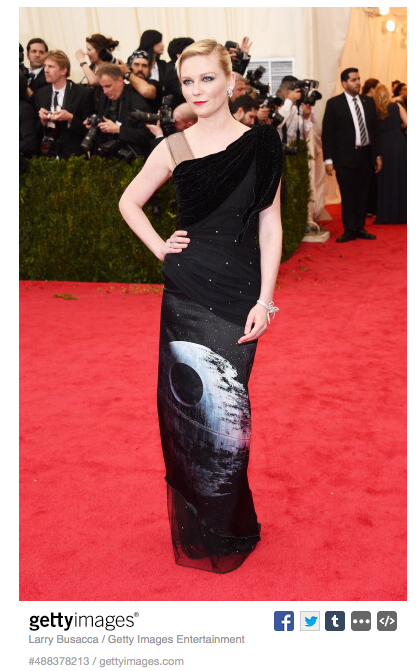 Looking like Grace Kelly from the waist up, this dress is the most elegant thing you could wear to a Star Wars convention, and the Met Gala is the perfect forum for this kind of witty approach to fashion. 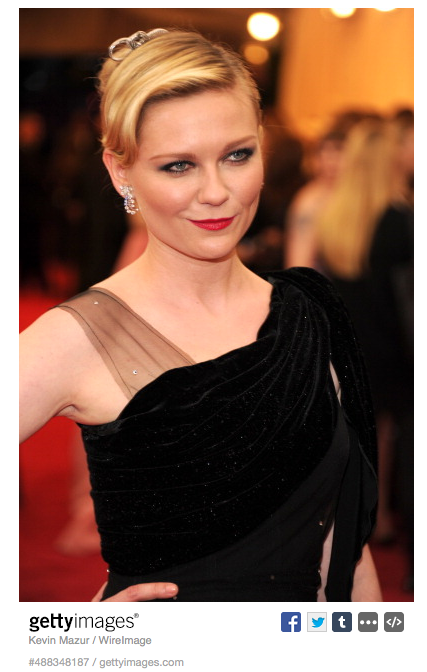 So that rounds out my overview of the Met Gala and my top five dresses, but I have more posts coming throughout the day so do come back for more!