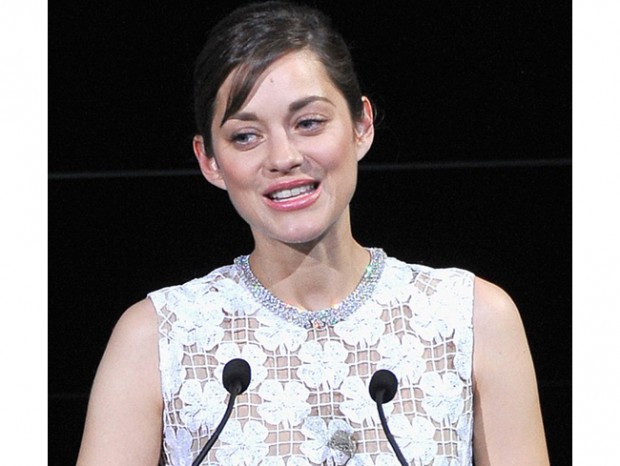 The Council of Fashion Designers of America held their annual CFDA Awards last night, and Raf Simons, for Dior, won best international designer. And while his collections for Dior continue to go from strength to strength, I can’t help thinking that if they were giving out awards for red carpet fashion, Dior right now would be bottom of the list. One of my very first posts on this blog was essentially a complaint about Dior under Raf Simons failing to deliver on the red carpet, particularly where Jennifer Lawrence is concerned, and with the very odd exception I continue to find some fault with almost everything they send her out in.

When a designer takes over an iconic brand, they’ll usually try to find some way to marry their own aesthetic with the heritage of the brand, and no one could say that Simons has failed to put his stamp on Dior. He’s dragged them kicking and screaming into the 21st century, leaving the fantastical opulence of the Galliano days behind in favour of razor sharp cuts and a visionary approach worthy of Christian Dior’s legacy. It’s a new New Look, and it’s a refreshing palate cleanser to the Galliano era, but where Galliano continues to be missed is on the red carpet, where he never failed to deliver absolute show stoppers. Dior under Simons delivers not so much show-stoppers as head-scratchers. 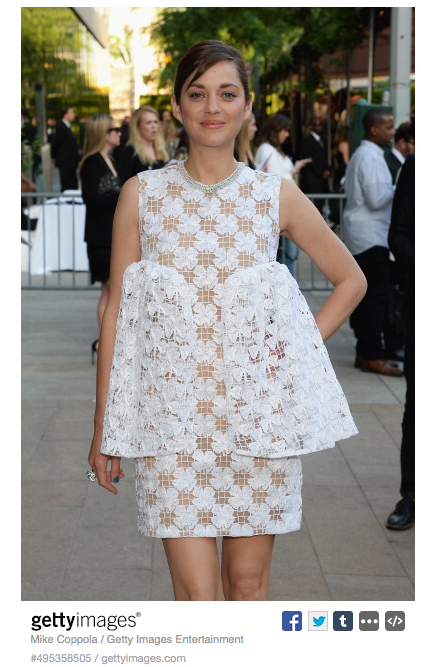 He attended the awards with his number one Dior Girl, Marion Cotillard, by his side, and her dress, above, is a perfect example of what I mean. This was one of the most under-whelming looks from the Dior Haute Couture Spring-Summer 2014 collection, which played with volume and texture in the kind of conceptual way that doesn’t necessarily lend itself to the red carpet, but nonetheless, there were several looks in the show that I think would have been preferable to this one for an occasion like the CFDA Awards. 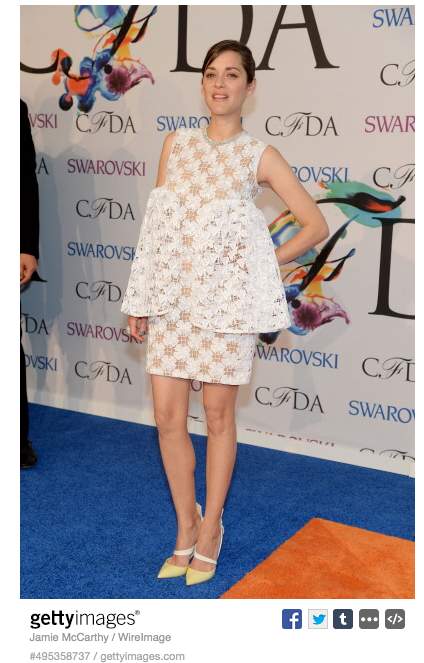 Case in point, those pointless, billowing wings that look tacked on to a straightforward lace shift dress, like a half-assed after thought, falling stiffly from the worst possible point on the bustline, and ending abruptly half way around the back. 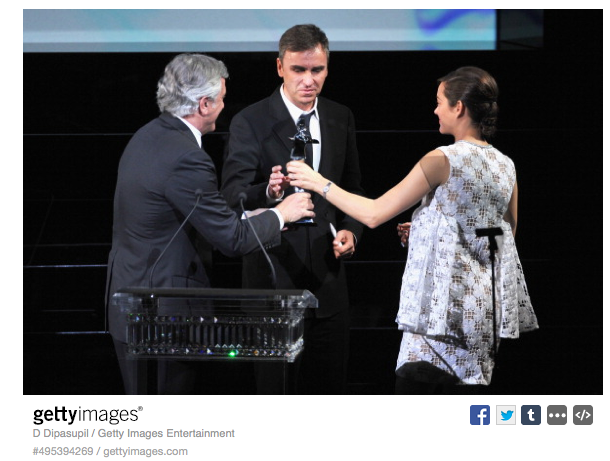 I don’t know what purpose they serve, other than to make Marion look, from some angles, like she’s dressed as a sanitary towel – normal, with wings – and from other angles like her breasts are roughly in line with her bellybutton. 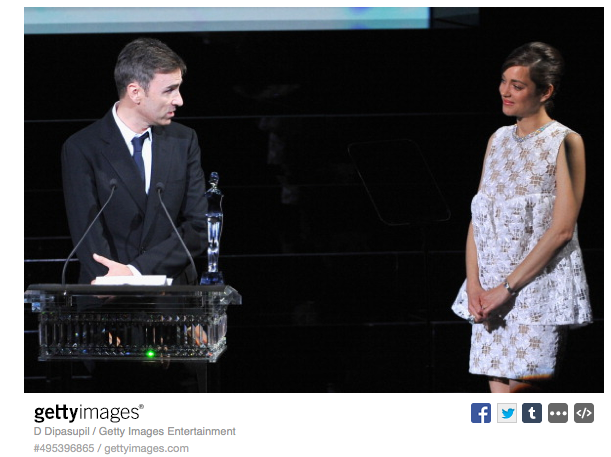 As you can see from the photos, Marion also presented Simons with his award, and she got a little teary eyed on stage with him, clearly genuinely proud of his achievement. Though that dress might have you reasonably assuming that she’s weepily wondering “How the hell can I get out of this contract?” and it is a real shame that that dress is representing his achievements at Dior on such an important night, because it’s not that they’re not producing potentially stunning red carpet looks, it’s just that they seem to have some difficulty choosing the right looks to represent the brand on what is arguably the biggest platform that they have at their disposal: their celebrity mannequins, Cotillard, Charlize Theron and Jennifer Lawrence.

It is interesting though, the different approaches they take to the three women who represent them. Charlize Theron would never wear, or even be offered to wear, a whimsical, oversized lace sanitary towel, and in fact her Diors haven’t changed all that much during the transition from Galliano to Simons. She still prefers, and consistently gets, structured column dresses that emphasise her height and her presence, and I wonder how much input she has there? I can imagine her rejecting the more conceptual, voluminous looks with a simple “No, bitch, I’m Charlize Theron. Make me look statuesque, sexy and fierce”, whereas J-Law, to her detriment, is probably all “Yeah, bitch, whatever. I don’t even care about fashion”, while Marion is all “Bitch please, I’m French. I can pull anything off.”

And she definitely gets full marks for trying. It’s clear that, of the three, she is the one that enjoys the position of muse, rather than just highly paid rep, and she really does her damndest to wear the hell out of whatever she is given. She even made a good fist of wearing this on the red carpet at Cannes. Promising at first… 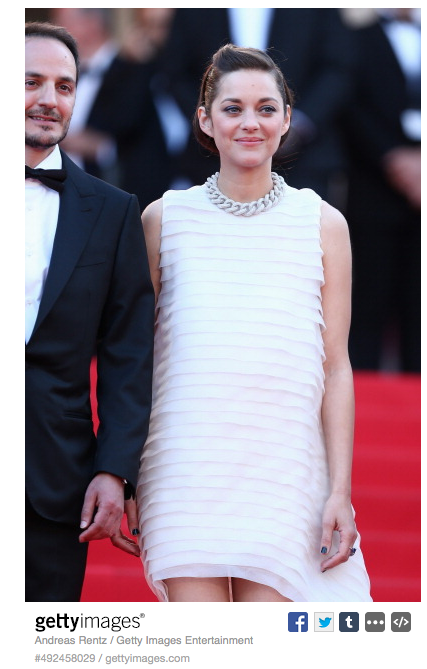 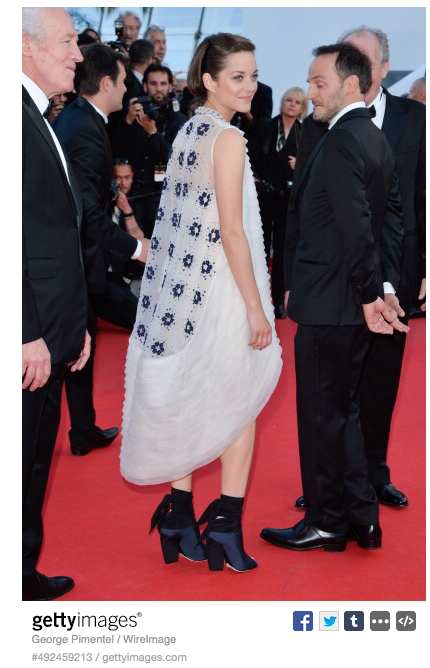 And yet, she came back the next night in this delightful number… 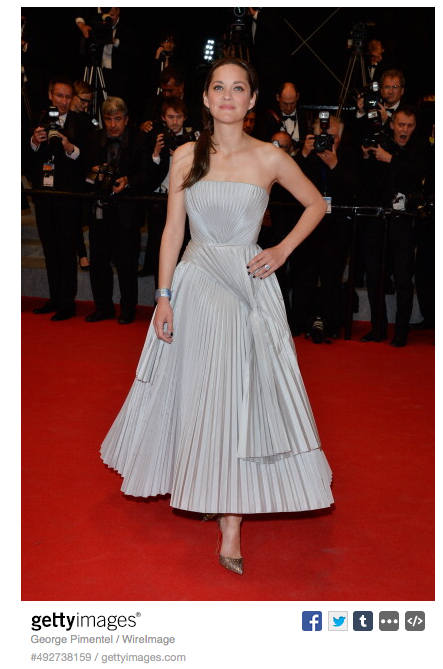 Classic Dior, deconstructed; this is without a doubt one of the more successful attempts to bring the Raf Simons view point to Dior on the red carpet, and Marion did it justice like only Marion could. That this was still fresh in my mind made last night’s showing all the more disappointing, and while his CFDA award was richly deserved, it’s going to take a little more consistency and a few more more red carpet hits for him to win me over.

1
Weekend Wrap-up: The Stories of the Week, with Kimye, One Direction, Brangelina and more...
2014 CFDA Awards: Rihanna Earns Her Fashion Icon Status